The Last "Stripes Down" Hodgeman ??? 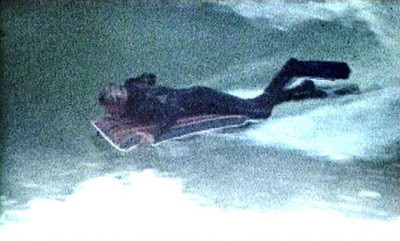 This is my last "Stripes Down" Converse-Hodgman experience...
It was the late 70's, and I was driving down Mission Blvd in San Diego. Being the 4th of July weekend, there were a million people milling around the beach, the boardwalk, and the intersections.
By this point in mat surfing history, the 60's era "Stripes Down" Converse-Hodgman model (which was shorter and narrower than the 50's era Hodgman version) had been in the grave maybe 8 years. The wider, slower, 70's era Stripes Across Converse-Hodgmans were also history. We were into the lean, flimsy Merrins by that time...but the old Stripes Down Converse-Hodgman still occupied a soft spot in my heart. Once they were broken in, they could be pretty damn potent if there was a bit of power in the wave. (The mat surfing in Crystal Voyager was on the Stripes Down model. )
So anyway, I'm driving down Misson Blvd, and in front of me jay-walks a middle age guy and his family ... all sunburned and "beached-out."
And...
One of his kids was carrying a Stripes Down Converse-Hodgman! It looked like it was in mint condition, based on how deep the striped colors were on the deck. (Maybe it was just still wet?)
The traffic was solid going in the opposite direction, so I couldn't make an instantaneous u-turn. I drove on, and at the first opportunity, hung a u-ee and burned rubber back to where I saw the family. Of course, there was no parking anywhere. I ended up stopping maybe a 1/4 mile up the road, and ran back. (And by "ran," I mean a 47 second 440 in flip flops. )
They were no where to be found. I schlepped around the neighborhood on the inland side of the boulevard for maybe a half hour, checking out all the seasonal rental units, but no luck.
The whole time I was looking, I was trying to figure out what to say if I found them. Of course, money would be offered, but how weird would it be for some breathless guy with 3 day's beard growth to pull out a roll of 20s and throw it at them from their old surf raft? Plus, I had to figure out what to say to my girlfriend if I came home broke and with a mat. (A whole Jack In the Beanstalk scenario came to mind.) Later, when I sheepishly told her about my adventure, she said we should go back and look for them again the next day at the beach. That's when I decided to propose to her. (It took 10 years, but she finally gave in.)
The next day we trolled the beach. Nada.
The wisdom of old age finally kicked in, and I gave up my search. But every time I run across an old shot of a Stripes Down Converse-Hodgman, I remember that family crossing the street with a piece of mat riding history in tow!
Posted by Paul Gross at 12:42 PM

It never hurts to ask! I once asked several strangers in a surf shop if anyone had a Kharmann Ghia for sale. An hour later I was driving away in one...for $250!