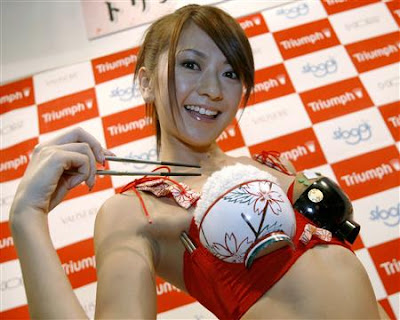 Jonathan J, on the lam from smut charges in Orange County, has come with with a new catagory of filth, inspired by the latest rage in chopstick recycling!
Posted by Paul Gross at 3:23 AM 2 comments:

More mat fun from the ages! 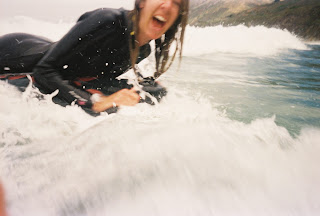 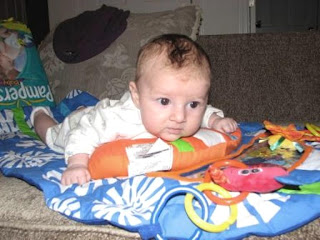 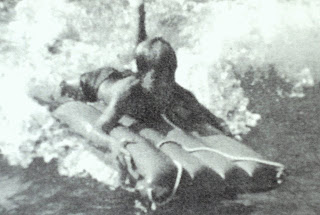 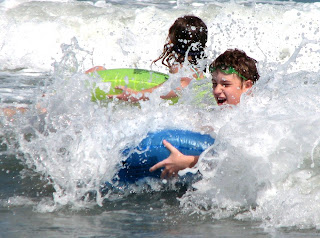 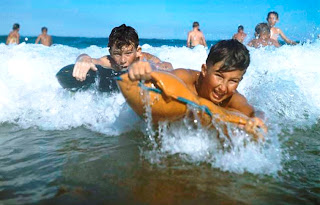 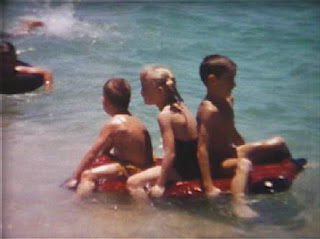 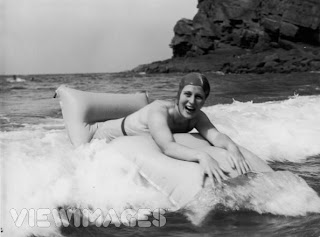 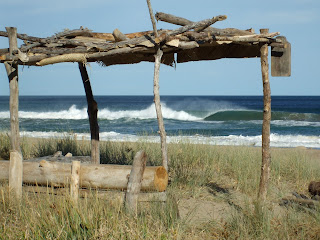 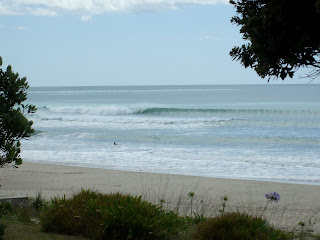 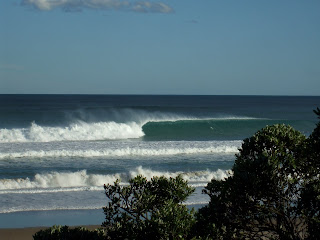 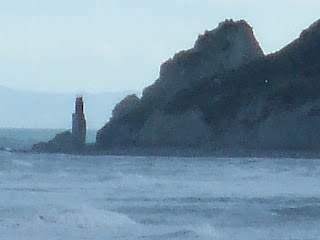 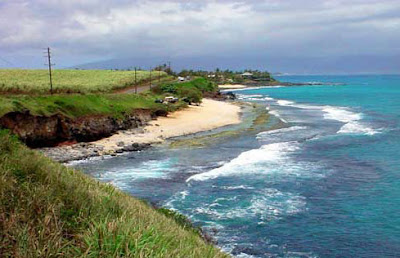 From Matt On Maui

Matt sent me this email saying...

First Session on my new Mat

The surf at Pavillions (Ho'okipa) was 6 to 8 foot on the face a strong side shore wind blowing (as is often the case) a combination of East wind swell and North-West ground swell made for a lot of water moving during the sets. I inflated my mat until it wouldn't bend to 90 degrees, I was shooting for 45 degrees, I think I went a touch softer than that.

Paddling out was a bit of a surprise, I had expected flex but I hadn't expected twisting, it was actually a little tough to stay on. Luckily at Pavils there's a nice channel so it wasn't too hard to get most of the way out. However as a set closed out the channel I found duck diving what felt like a trash bag full of air was very difficult. I made very little progress until the set relented and I was outside.

It was very early and I was the first one out. I had held on pretty tight to my mat while battling the white water and as I sat outside and felt the howling wind I realized that was a good thing because if I let go I might never see my mat again! I had read about how difficult riding a mat is at first so I paddled into a decent sized right with some apprehension. Catching it was a little tricky but pushing down on the nose to arc over and in as I kicked did the trick and I was sliding in, and I do mean sliding I felt almost completely out of control on the steep drop, instinctively I griped harder which hardened up the mat, slowed me down, gave me control over my direction, so I made the wave and swung back left to the channel. I was surprised at how quickly the mat slowed down when the wave died down, this thing likes some juice.

I continued riding for an hour going both right and left. I found that by letting go of the mat and letting it run I could get some good speed. Taking off was the most challenging, late take offs were the easiest and a real rush at the speed with which they slid to the bottom, I would then harden the mat by griping and squeezing and I could change my trajectory. I wasn't really turning but I was going where I wanted to go, t did try to do more of a turn but didn't really accomplish too much.

At one point a bigger set caught me inside and I was scrambling for the corner of the left, I made it to the very top corner, about eight feet up on the vertical face and just as I thought I was going to make it the lip gave me a little tap and I was sliding side ways back down, I went with it and slid around almost instantaneously into the proper orientation and made the wave at speed no problem! However my session was not with out mishaps on one I was too late and went over with the lip, mindful of the wind and the very real possibility of loosing my new mat I death gripped it, boom in the white water, boing and out I popped riding the white water, interesting but I don't think my back would like that on a regular basis!

All in all a very good first session. Take offs and turns will take a lot of work, can't wait to see how it works in the tube! Found a good relaxing way to swim out when my back got sick of being on top, flipped over and swam out on my back like I do often when I body surf only I now I drag the mat behind me. Also had fun with my friends when the paddled out and asked, "what are you riding?" I told them a trash bag!

Pranaglider Made Me Lose My Board!

And it was worth it. Yesterday was one of the loosely organized surf sessions a few of us surf bloggers have together a few times a year. It starts with two people meeting up (specifically me meeting Clayfin to pick up a board he'd shaped for me) and eventually morphs into a full-on LGDAS (which meant "Let's Get Drunk and Screw" when I was in college—comes from some country song or something—but for the purposes of this blog it means "Let's Get Down (to Huntington) and Surf"). So, I'm suiting up and I spot a guy walking by with a mat. I was stunned. Who would've thought I'd run into a mat rider? Well, I learned later that it wasn't a coincidence. Clayfin had emailed Pranaglider and told him where we'd be. I didn't know that! I got all excited and lost my mind babbling at him. But I digress.

Anyway, we all paddled out . . . into some pretty sad high-tide-waves-backing-off-and-not-wanting-to-break conditions with what started out as an offshore breeze. Little did Prana know that I was watching him. Remember, I have a mat but before yesterday I'd never seen anyone on a mat. Wherever he was, I was watching. Even when I was watching for a wave I could take, I was watching him. I wasn't on a mat. I was on my longboard and that made it harder to watch as I was farther outside than he was. At some point, we were both lined up together. I saw Prana turn to go. I had a birds-eye view. He jumped on that wave, which had no shape, and did a beautiful bottom turn. It was a sight to behold. I'd finally seen a mat ridden up close. It's truly a sight to behold. And as I beheld him on that bottom turn, the next wave came and smacked me good. No leash. Board gone. Much laughter on my part.

Thanks, Prana. I know it was hardly a good day in the water, but you in particular made my day. I hope to get on my mat this week if the waves permit.
Posted by Surfsister at 8:28 AM 2 comments: 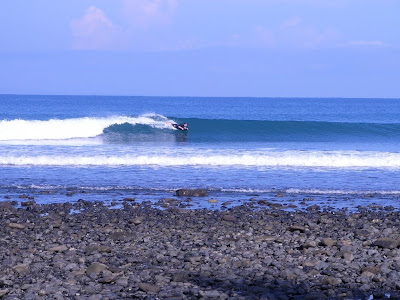 Photo is courtesy of Gene Berger, an old-time San Diego fellow whose name you might recognize.

We had an epic reunion "down there" with all our old buds -- Pleskunas bros, Gene, Zigs (Rick Vorce) -- the only guy missing was Bulldog (Larry Duff)

Matting With A Dolphin 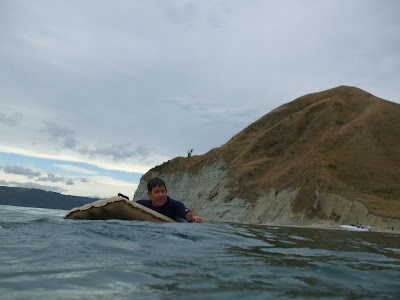 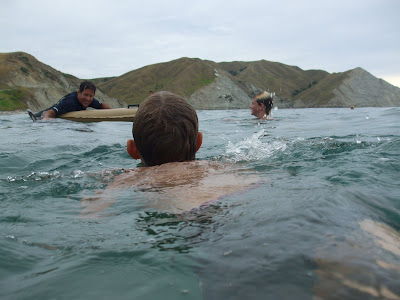 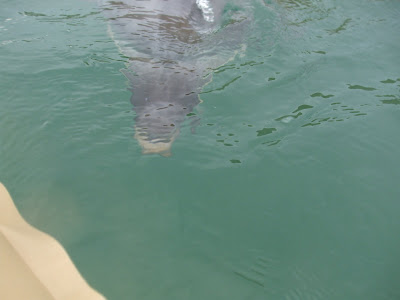 Moko The Dolphin plays with people most days on the Mahia Penninsula, which is about an hour south of us here in NZ. I took out a canvas mat at first, got towed around a bit, and then switched to a 4GF when I reckoned that Moko would most likely not bite through it.
The best part was trying for half an hour before getting someone's rugby ball back from Moko, while being teased the whole time in a skillful game of keep-away. You can see a shot of this in the vid. I'm going back when there are less people around in order to get better acquainted with Moko. More soon, hopefully.