John M was the proud recipient of 4GF UDT #2, and weighed in with the following report... 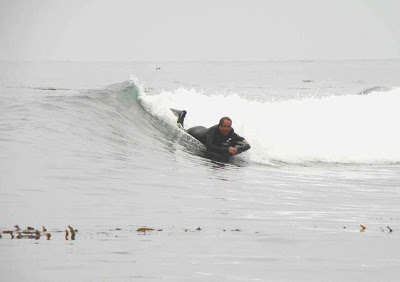 Jeff C wrote out a full photo essay on yesterday's trip. I won't bore you with the whole 4 part shebang, but here is a pic showing how the minimum threshold for me to ride an air mat has been lowered with the UDT. I was stoked to be able to actually get in to waves that would have been hopeless on a smaller mat. It was basically flat with inconsistent sets that were at least quadruple overhead...for me(!)

The location is, uh, "Southern California."

PS - I have no idea why I look so serious. LOL. Sometimes it's harder to ride small waves than big waves. I also just noticed that my hair looks like one of those plastic toupees the guys in Devo might have worn. That, or I'm working on an early Clark Kent look-a-like.

the kelp could be a giveaway

now that i am east coast i miss the kelp speed bumps. and watching surfboards cruise by while their riders disappear into the wave and the green tentacles.

Glad to find this blog. I tried to sign up for the Surfmatz.com forum but no go. Anyhoo, I'm a UK based kneelo who rides a Redback on the little days and am hooked!

Cornwall?If so,see `ee at the Droskyn next month!Wish we had some kelp here in Japan to snag all the bleddy flotsam dropping in...

What's happening at Droskyn next month?

It's about a couple of very worthy petitions so not specifically Mat related but certainly relevent.

They're both to the UK Government. One is urging them to lift the charge for the Royal National Lifeboat institute to use maritime radio and the other is demanding a secific body to oversee and manage beach cleanliness.

By the way, my email addy is