Given that even the most fundamental air mattress is a pretty good wave rider, how did we get from here… 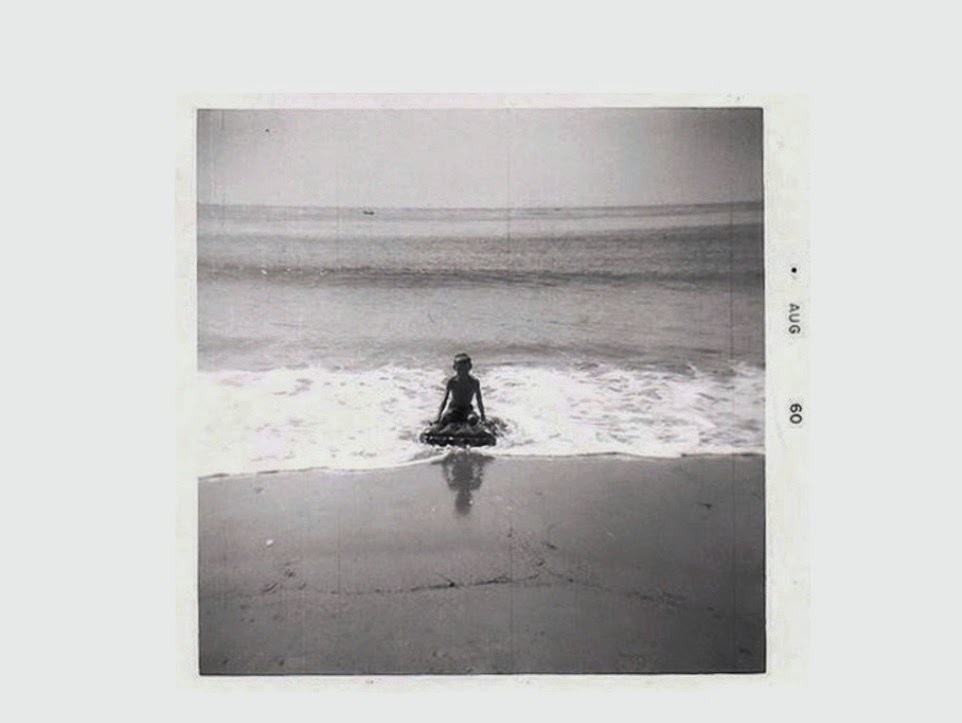 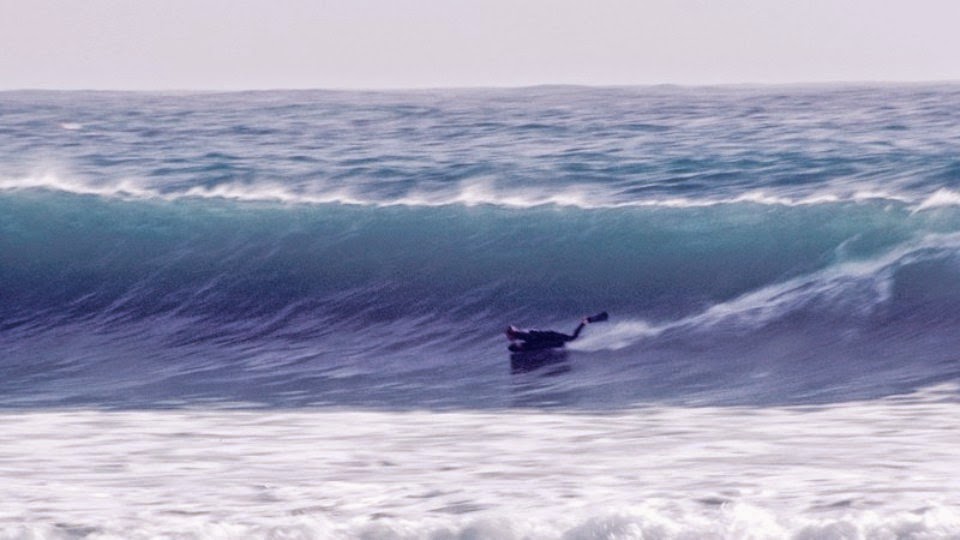 And how was the Morey Boogie instrumental in the advancement of mats and mat surfing? 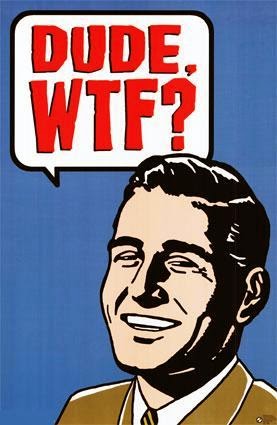 The answer to those questions sounds like a beachfront zen master’s response to the question, “How do you ride a surfmat?”
“You don’t. It rides itself.” 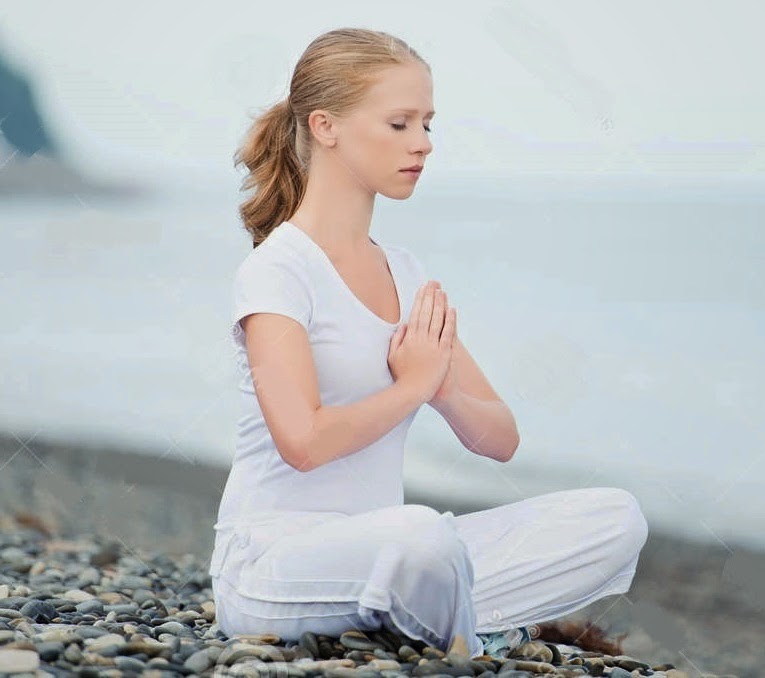 The evolution of mats was organic in the symbolic sense. Out of sheer luck, the basic design of an inflatable, rectangular box of fabric surfed pretty well. And because mats were fun for anyone to just play around with in the shorebreak, beach concessionaires could make a modest return renting them to even the most casual beach goers. At no point in the growth process of mat surfing was there any grand plan on the part of any of the participants -- engineers, manufacturers, marketers, middlemen, or kids at the beach -- to make millions, rule the world, or prance around like the stud pony of Hermosa Beach. It was just a long, glorious series of coincidences that yielded the most fun you can have in the ocean.  (Did I mention this is a subjective historical overview?)
Throughout the decades, mat surfing has thrived as a sanctuary for the 10 year old child in all of us. Surf mats resonate with the youngest beach goers... 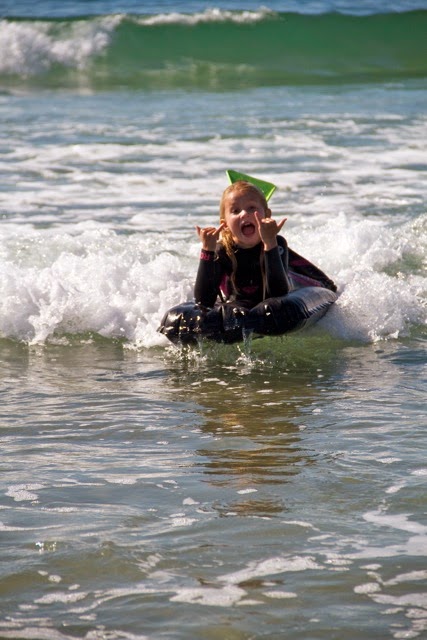 ...while still providing an unlimited cosmos of challenge to the most experienced surfers .

Mat surfing can be a cradle-to-the-grave endeavor, but by the same token, it means little to anyone other than another mat surfer. We do it for ourselves, or we don’t do it at all.  Not much else in the modern world can elevate us on the bubble of self discovery so effectively.


What makes the development of surfmat design so interesting is that, from the 1930’s to the 1980’s, virtually none of the design work was intended to advance the art of high-end mat surfing. Mats were made in large quantity factory runs, and designs were only tweaked to either streamline production, or enhance durability for use in the rough-and-tumble rental market. How well a mat performed on a wave was of zero interest to a manufacturer in Wisconsin or Taiwan or wherever.

If a mat rider wanted to wring more out of his/her mat, they either had to accumulate a collection of mats and sort through them to find a gem, or just keep surfing whatever was available and develop their riding technique to suit. And in truth, most people liked it that way…otherwise, they wouldn’t have been mat surfers in the first place!
It goes without saying that, in the ‘50’s, 60’s and 70’s, George Greenough mastered both approaches. He found the best mats the world had to offer... 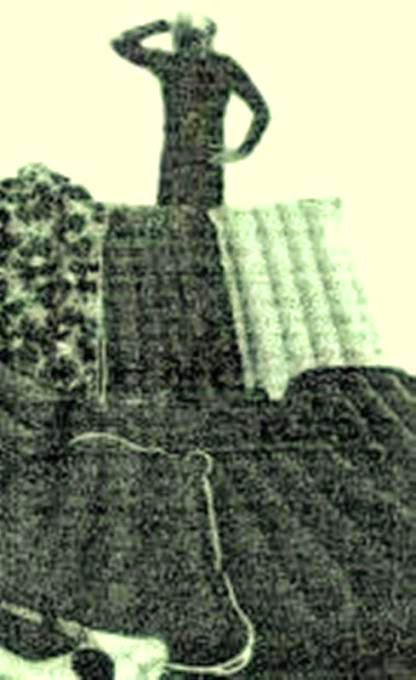 ...then rode them so well that he was able to push the existing limits beyond anything other mat surfers could imagine.

What makes George’s genius at mat surfing so ironic, in retrospect, is that it was taking place in the shadow of his stardom as the guru of the late 60's shortboard revolution... 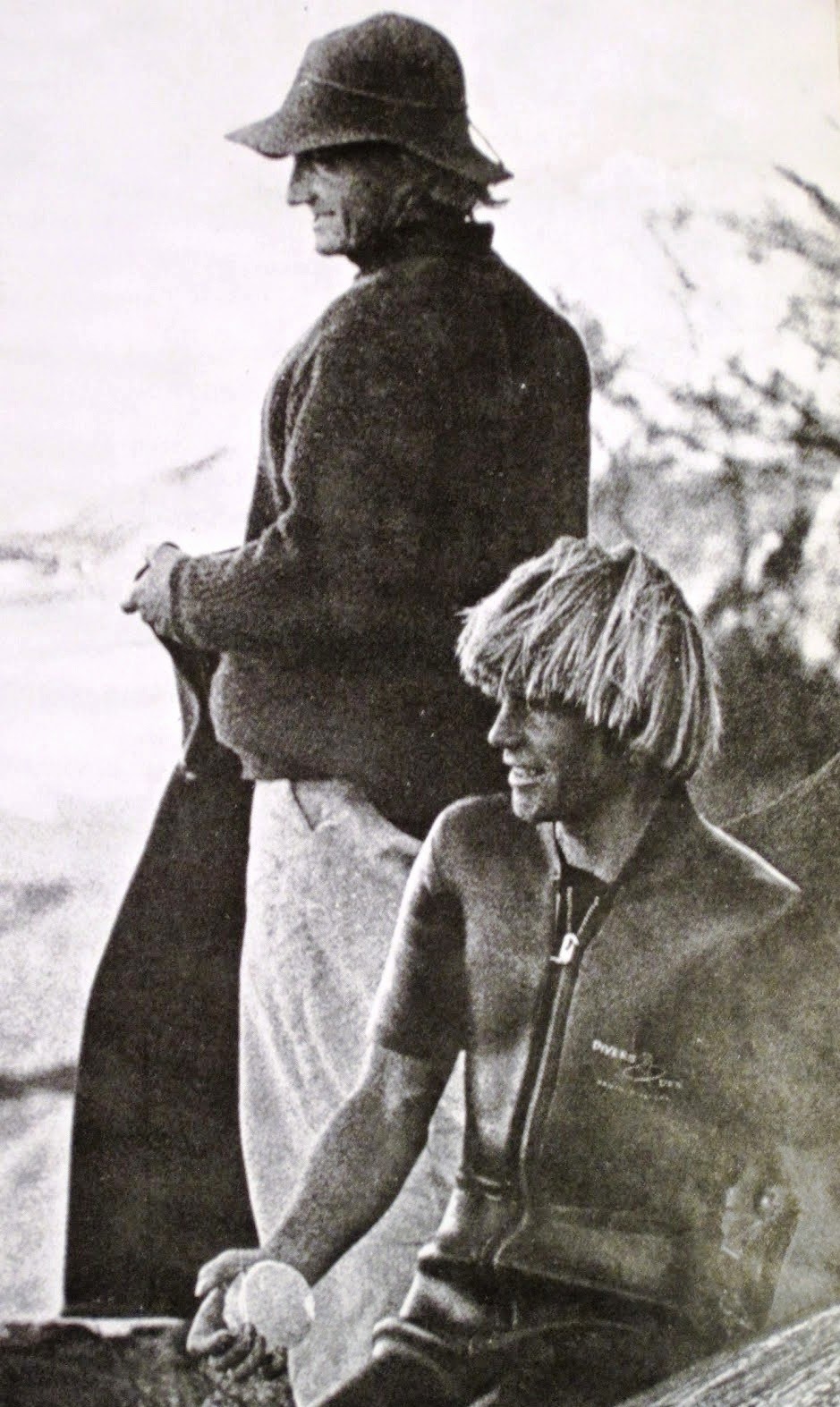 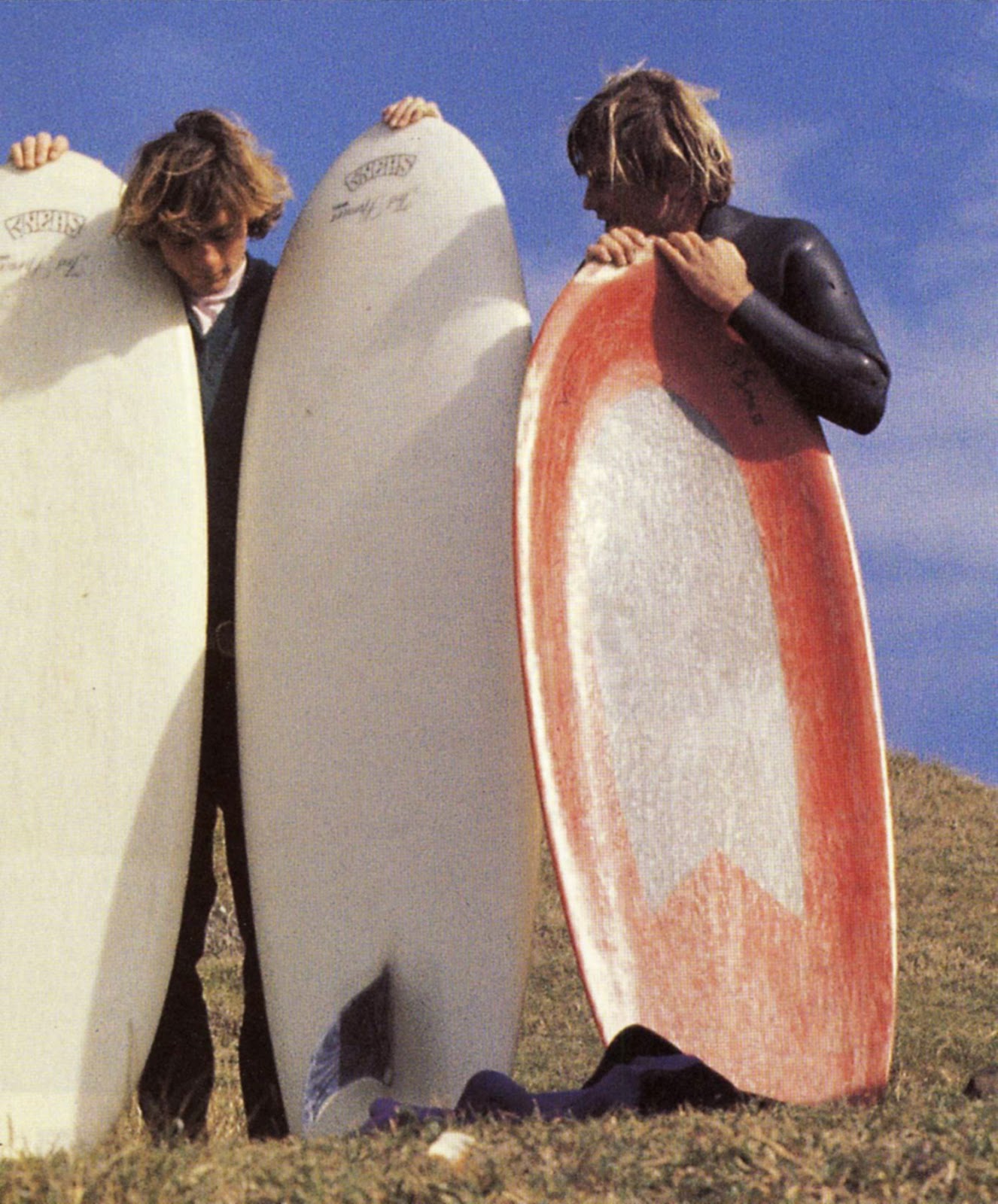 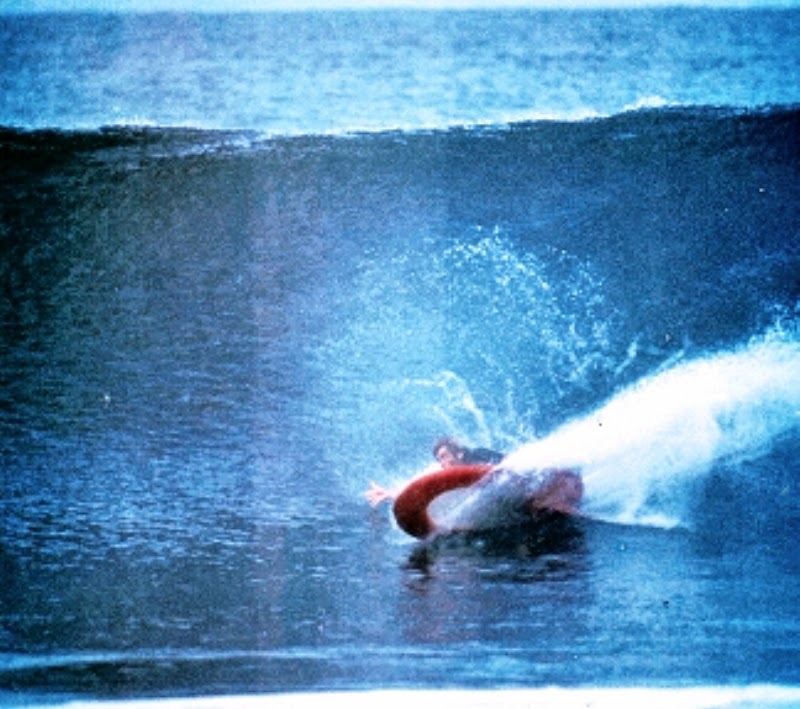 It would be like finding out that Jimi Hendrix transformed the art of playing the bagpipes during his band's off hours. George’s brilliant mat riding had a dog whistle component to it…only a select few were able to ‘hear’ what he was saying while he was busy revolutionizing conventional surfing. If all he’d ever done was ride mats, without the beach-cred of his radical kneeboard surfing to back it up, who knows if he would have changed the course of our own history so dramatically. Probably...but somehow it wouldn't have been the same.
So OK, mat surfing has existed since the 1930’s (in Australia,) and flourished worldwide since the 1950’s. All mats were “good” because their design and construction was inherently well suited to riding waves.

Converse-Hodgman, in addition to their famed rubber-ended rental mats, was turning out some really nice all-canvas inflatables during those years. Clearly, they weren't intended for use as hard core surf mats... 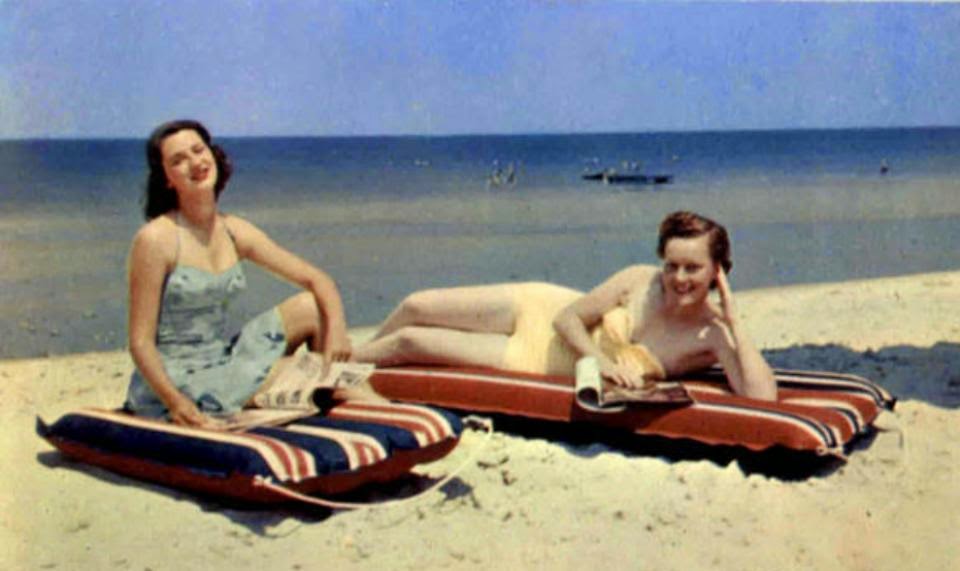 ...but in the hands of matters like George, those soggy, red-white-and-blue beasts could fly. 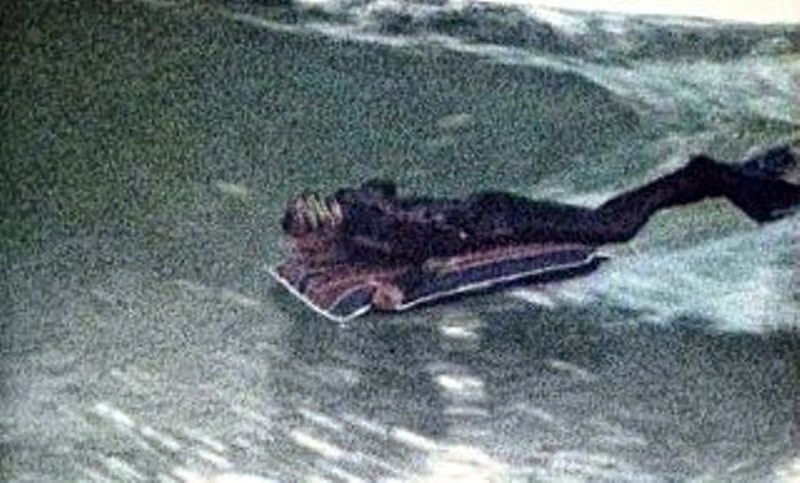 A key moment, for us, came in the early 1960’s when George realized that as his canvas mats ‘broke in’ and got softer from constant use, they became noticeably faster. That was the ‘ah-ha’ moment that was the tipping point, in terms of mat performance. But it took 20 years for that bit of knowledge to kick into high gear.
Here’s how it happened…

By the late 1960’s, we were happy idiots, riding mats in the relatively uncrowded junk days along the California coast….point breaks preferred, but not necessary. The Converse Hodgman mats were George’s weapon of choice, so that was all the rest of us needed to know. Our car trunks looked like a mobile warehouse for the Hodgman factory.  While a bit stiff and heavy, Hodgmans were well made…so they could be ridden long enough (for years in most cases) that they would soften up and perform well without much worry of a failure in the water. (The lighter dime store cheapies went well right out of the polyethylene bag, but lasted 1 or 2 go outs, tops.)

If you had asked any one of us if having Hodgmans readily available at the local sporting good store for $50 bucks would be agreeable for the rest of our lives, we would've all screamed “yes!”


But -- as with all good things -- something else came along and, seemingly, screwed it up. 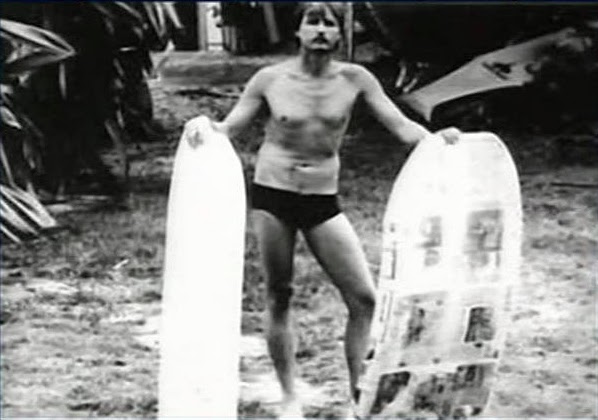 In the summer of 1971, former surfboard manufacturer and aftermarket product wiz Tom Morey came back from a stint in Hawaii with a flexible ethafoam bellyboard in tow. The concept wasn't his idea, but the idea to build these body boards in quantity and market them in a professional manner certainly was. 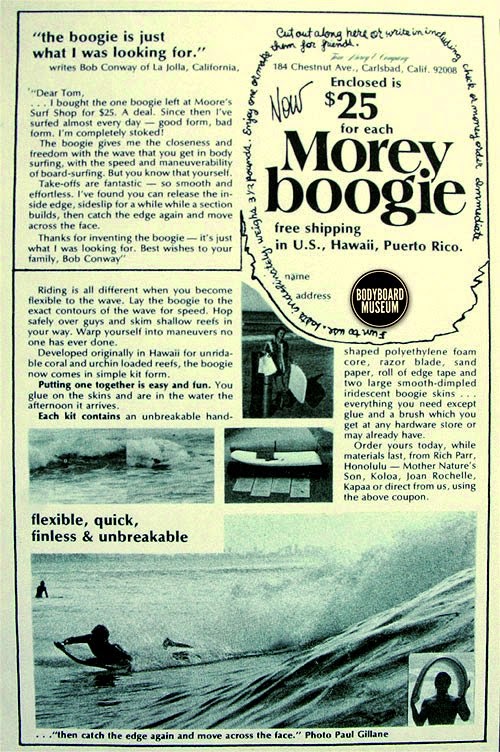 Tom's plan, he said to anyone who would listen, was to revolutionize surfing with the semi-solid flexy flyer he called a Boogie. What seemed like a laughable intention at the time turned out to be nothing short of a game changer. The silly, funky, improbable innocence of mat surfing was crushed by the infinitely more pragmatic Morey Boogie. Beach rental shops quit carrying mats…because Boogies were more durable. Young kids were now being weaned on Boogies rather than mats…because Boogies were what were being rented. And so on and so forth. It was a viscous cycle from the perspective of a mat surfer. The body board crowd even cribbed our favorite word -- fun -- and started promoting Boogie surf contests under the euphemism, "fun-test".
Converse Hodgman, who boasted many other, far more profitable outdoorsy products, dropped surf mats from their line by the mid-70’s.

The writing was on the wall, and the world’s mat surfers tried to eek every last go-out from their threadbare stash of Hodgmans...

...while looking around for another standard bearer, mat-wise.
When the Morey Boogie displaced the Converse Hodgman, it generated what amounted to mat surfing's own "transition era," which was roughly 1978 through 1984. It was a painful journey that kicked us out of our comfort zone, but the rewards were beyond even George's imagination.

Ah hah! Now we're getting to the "heart of the matter". Max

Thanks for the insights, Paul! Who knew that learning about having fun could be so much fun!
George L. aka Speedshaper