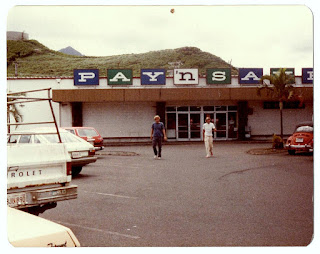 George, Gloria, and I were on Oahu shooting a Sunkist Orange Soda commercial. It had been raining for days, and without enough sunshine to film, we were running out of ways to keep busy.

Voit had recently begun the transition from molding their Duck Feet with harder rubber in the foot pocket and softer rubber in the blade to, well, the other way around. The new, stiff bladed Duck Feet were less comfortable and less powerful. So, back on the mainland, we had begun the process of buying up as many of the old fins as we could find in sporting good stores and dive shops.

In the case of the great state of Hawaii, even variety stores carried swim fins, so, during our rainy down time, we hit every store on the island that had even a slim chance of carrying Voit swim fins...including the Pay 'N Save in Waipahu. As you can see, we left empty handed from that particular store.

It turned out to be a fun couple of days, because and we were able to explorer nooks and crannies of Oahu that we'd otherwise never encounter.

We ended up bringing home maybe 5 or 6 pairs of fins from that trip. I still have a couple!

Anyway, here's a polaroid Gloria took of George getting ready for a day of filming... 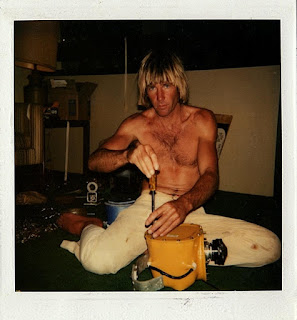