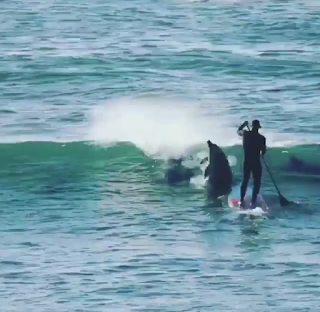 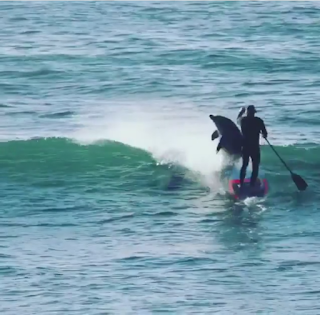 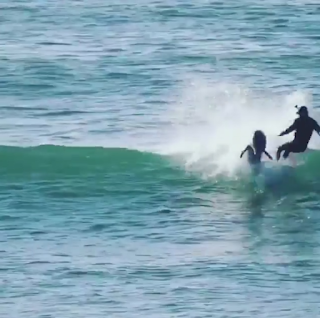 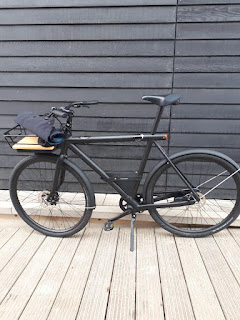 Yesterday i had my last session of the year at my homebreak Scheveningen.  Winter is very warm at the moment (8 degrees), which is warm for this time of the year!

Bonfire is almost ready for tonight, unfortunately i have to work…

Have a great new years eve and all the best in health and luck for 2019!

Marc
Posted by Paul Gross at 8:14 PM No comments:

Just When You Thought 2018 Couldn't Get Any Weirder... 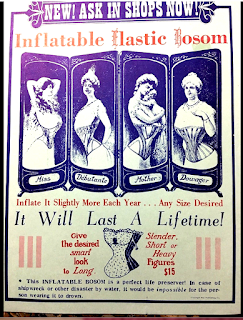 George Leone found this poster on Ebay...and we couldn't resist one last blast of weirdness before the year is out! 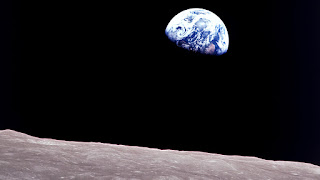 Earthrise...seen from above the Moon's surface by Apollo 8, Christmas Eve, 1968.

Hi Paul
I've attached a clip of a wave here at our local beach break. Made a helmet cam out of an old bike helmet and an early GoPro. Good fun!!
Hope you are well and back in the water.
Jeff
Posted by Paul Gross at 5:19 AM No comments: 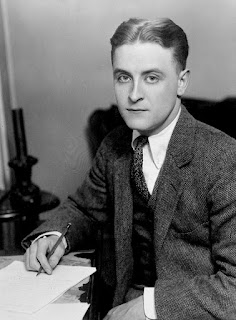 Today is the unfortunate anniversary of the death of F. Scott Fitzgerald. He passed away at age 44 on December 21, 1940. Sadder still, Fitzgerald was never fully recognized for his masterpiece -- The Great Gatsby -- during his lifetime. His earlier novels were a success, and made him famous. But Gatsby had to incubate for decades before its genius became apparent.

Insightful lectures on Gatsby continue to flourish, nearly 100 years after it's release. But what the scholars miss, and what is of some interest to us, is that it contained what was certainly the earliest reference to inflatable rafts in literature. (Keep in mind, this was written in 1925, about events of the Summer of 1922.)

"At two o’clock Gatsby put on his bathing-suit and left word with the butler that if any one phoned word was to be brought to him at the pool. He stopped at the garage for a pneumatic mattress that had amused his guests during the summer, and the chauffeur helped him pump it up."

So even the wealthiest, 24/7 party people of the era were charmed by simply laying on a raft! Tragically, for the fictional Jay Gatsby, he met his end while floating on that raft in his pool. 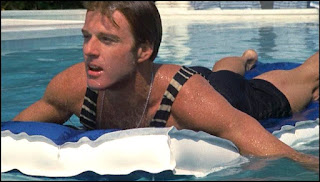 Obviously, this image is from the 1974 film version of the book, with Robert Redford in the title roll...so who knows how accurate the portrayal of that raft was? (My guess is the filmmakers didn't dwell on that detail.) Still, its an interesting design concept, with the block rails. 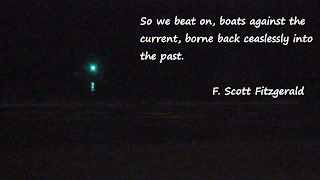 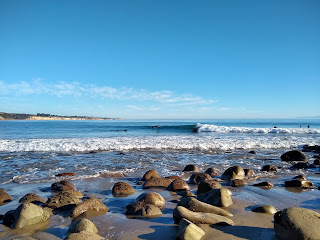 Hi Paul,
Been fortunate to have taken this week off work and timing it well with the recent swell.  Monday was Rincon, crazy big, crowded and fun.  More watching than wave riding but I got a few.  Tuesday was Deveraux and Sands, good times, much less crowded and low key.

Today, December 19,  was the climax.  Smallest waves, but best times for sure.  Surfed for about 5 hours mid day.  Only two guys in the water when I showed up.  Also a 4' peeler ran right past me with no one on it as I rode within view of the beach.

The crowd swelled to about 8 for several hours, then when it got near 20 I decided it was time to go.  But not before I snapped a picture of Kenny on one of the smaller waves.  We had been hanging together off and on for about an hour when I decided to call it a day.  I was eating a snack when I saw one of the set waves come in, and Kenny looked to be in good position.  Then I thought, "No, he's too deep, he will never make it."  Well, he did make it and had a great ride.  Unfortunately, I did not think about taking pictures until I saw that wave, so the one included is him on a smaller wave.  BTW, those smaller ones were just as fun, maybe more sometimes.  Just ask Kenny.

Matt
Posted by Paul Gross at 6:48 PM No comments:

From The Aussie South Coast 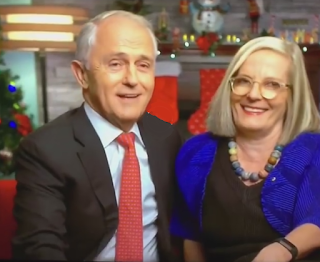 Our previous PM Malcolm Turnbull and his wife Lucy both rocked the rubber Surfoplane back in a day!

adam
Posted by Paul Gross at 8:03 PM No comments:

We're in the middle of a 2 or 3 day run of giant surf on the West Coast, and Surfline ran a piece on how the pros get ready for big waves.  True, for most of them it's their full time profession, and surfing giant waves is always life threatening. So, anything they can do to make it safer makes complete sense, regardless of how complex and expensive it is. I guess my point is, it's not how I see surfing as a sport.

“In my head, I’m already going through a mental checklist. I need to get a boat, a jet ski, I need a place to stay, I need to book airline tickets, all that logistical stuff needs to happen. Then there’s a whole other side to it in regards to my equipment, what boards you want for the forecasted conditions, what are my wetsuit options, flotation options, all of that stuff all the way down to the fins and leashes and all that. There’s a big list. And everything becomes really rushed in these windows, so understanding that I’m going somewhere cold, I can have all that stuff ready. I know what my closet looks like and it’s like, ‘Boom, boom, boom!’ I know what I need to grab. It sounds easy when I break it down like this — but it’s a massive list that can create a lot of anxiety before the event.

“I’m pretty meticulous with my gear. I’m the one putting in my fins. I want to wax my board. I want put everything together. So, there’s a lot of little details there. I think that’s really important though, to get all of that done and start putting your brain to use visualizing what’s going to happen. That’s a big part of what we do…sometimes you have to see it before you just turn around and go. I don’t have any weird routine things, but fin keys are a big one. We’re going to need them, so there’s definitely fin keys in all my bags. Also, if you’re in a position to help someone you should have that stuff. I’ll pack tourniquets, packing gauze and all that stuff. Your bag may be the first one somebody can get to, so you have to be ready for those kinds of things too. It’s not just the surfing.

“Another thing is that once you get everything organized you have to pack it back up so you can get it on a boat. Then packing it on the boat for the day. It’s a process, but I think repetition makes it a little bit easier. You want to have the right stuff, though. You don’t want to get somewhere and then be like, ‘I ran out of cartridges, or I don’t have this or that.’ Sometimes the airlines take your cartridges, so a big part of your list is adapting. You’re going to have to adapt. You’re probably going to have a flight delay. One of your boardbags isn’t going to make it, your cartridges are going to get taken out of your check-in bags.”
Posted by Paul Gross at 7:39 AM 1 comment: 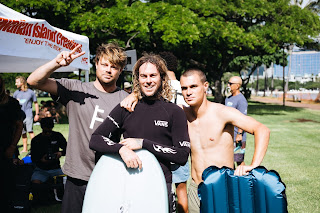 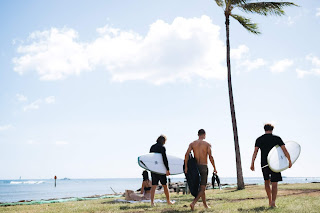 Details here. Looks like they got woke this year!
Posted by Paul Gross at 4:31 AM No comments:

From Cher and Steve 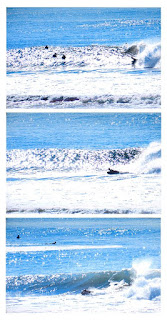 We’re happy to hear that you are on the mend. So glad that you’re feeling better!
Here are a few pics from last weekend of Steve flying his Lotus on a fun wave. He was taking off out farther and deeper than the guys on the usual take off peak, as you can see!
Our friend Schultzie kindly captured the photos.
We hope that you enjoy the photos! Flying!
Aloha,
Cher and Steve
Posted by Paul Gross at 12:53 AM No comments:

Hope all is well with you and that your truly on the mend for 2019!
I am out of the water with a infected finger so picked up the camera with Paul being my muse, with #ericwouldgo keeping a watch over us at his local.
Merry Xmas and all the Best to your Family & Friends World Wide.
Adam
Posted by Paul Gross at 9:30 PM No comments: 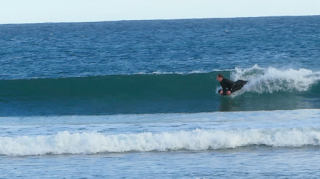 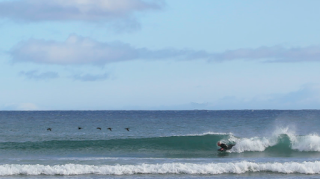 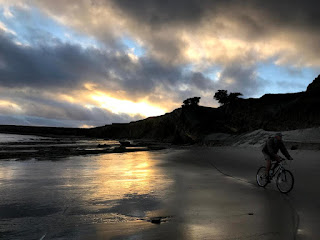 Howdy boys,
Yessirree, Crister was here for a few days, in between delivering babies in his OB rotation at UCSF hospital. (and I don't mean OB as in Ocean Beach.  Obstetrics.  Although he does seem to get in the water up there now and again.)
But, back to adventures. These are screen shots of the early sections of +/- 20 second rides...small 1-2' and enough fun and down-the-line mat speed across the inner sandbar to make a grown man weep for joy. This was on Friday.
In the water 2:30-4:15, then tail-winds and rainbows until dark and back at the car. And smiles.
Jim
Posted by Paul Gross at 8:42 PM No comments:

From The Philandering Mr. Gromadzki 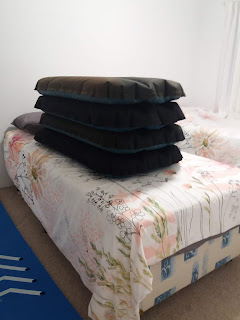 My wife has gone OS for awhile so, the 4GFs have been moved into a room of their own...hope the neighbours don't start talking.😎 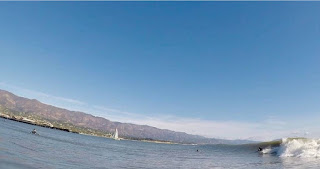 An SD friend, Wolvie, sent me this, though I believe it was taken by someone else.  Wolvie asked if it was me.  Nope, wasn’t me.  Wasn’t Jim. Wasn’t PG.  Who could it be?  I’m also wondering if someone Photoshopped this.  Where are all the people?  And why isn’t someone poised to shoulder hop?

It’s all so mysterious.

Mystery solved:  Aaron Foster is the rider, out with two other matters. Friday, November 30.