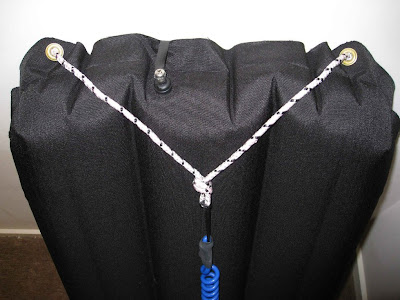 Just got back after a surf in 35 knots of wind. I would never have considered going out in it without the leash etc on the mat. The leash definitely saved me from losing another mat.

However, you do lose some of the feeling of total freedom and so in normal conditions I don't bother attaching anything. There doesn't seem to have been any stretch in the fabric around the grommets yet, but this may be due to the fact that in reality it's rare that much stress is put on the mat. I have a coiled leash attached to it and this seems to take up some of the strain plus, as i previously mentioned, I still hang onto the mat itself when i get eaten alive by a wave.

I think that this is the way to go, and would be very wary about using a rope/leash as anything more than the last line of defence against mat loss.

That said, one potential way of making the grommet mat attachment sturdier may be to add another layer of deck material along the front fringe. Although I'm not sure how that would effect general mat flexibility.

I will get back to you again if any stretching or tearing starts to happen, but so far I'm happy having the option of attaching myself to the mat, but prefer to ride it without.

The reason why I didn't add extra fabric to the grommeted areas is that it might transfer any stresses back into the main body of the mat, and cause catastrophic failure. My idea was that if one or both of the grommets were to fail, the flange would (hopefully) be all that was damaged...thus making it a cosmetic failure, not ruining the whole mat.

Time will tell. Until we have a failure, we won't know!