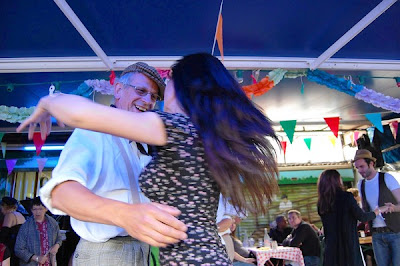 This reminds me of why we surf mats!
Posted by Paul Gross at 1:36 PM 1 comment: 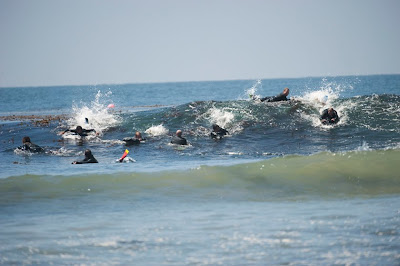 Imagine how the guy on the surfboard must have felt with all of the mat riders going around him to go for that wave. I can guarantee there was probably audible laughter during the mad scramble to catch it. One of the things that sticks with me about Sunday's session was how much laughter there was in the water. Well, that and the absolute shredding people were doing on those beautiful waves. Let's do this again . . . sooner rather than later!
Posted by Surfsister at 4:22 PM 2 comments:

For catching ANY wave.... 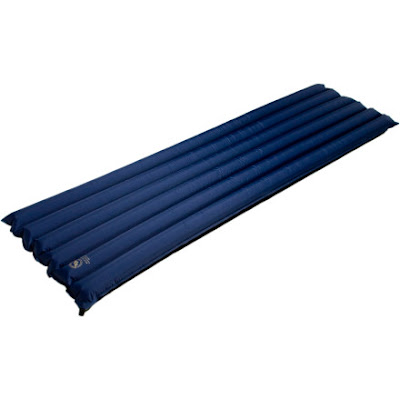 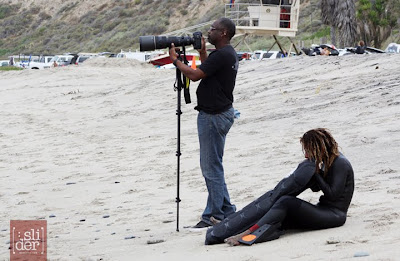 We've had two mat meets thus far. And Ken has taken close to 1000 shots at those two meets combined. No one ever takes a picture of the photographer. This time, someone did! (We were at San O for the pig luau. I took two of my pig longboards . . . and then sandwiched my surf session between two mat sessions.)

I'd like to think of this picture as one of us preparing for battle. Ken's camera is fully loaded and ready to fire. I'm prepping the heavy artillery. (Note the "heavy artillery" is a mat!!)
Posted by Surfsister at 7:57 PM 5 comments: A Muggle of So Cal Matters 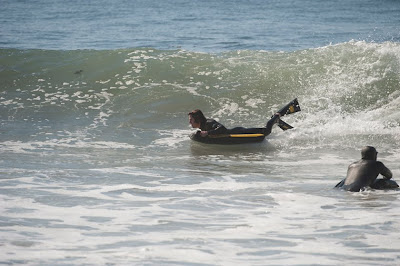 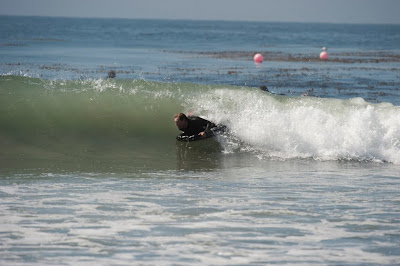 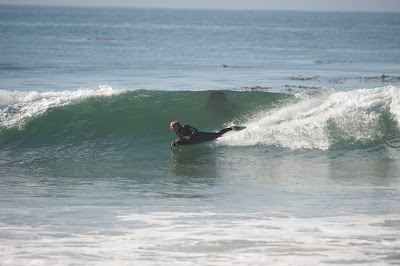 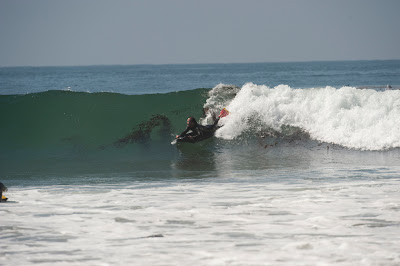 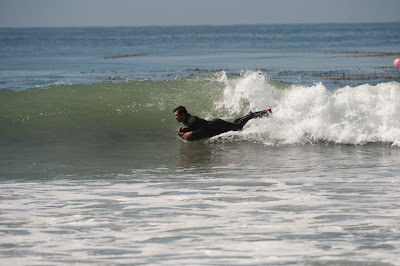 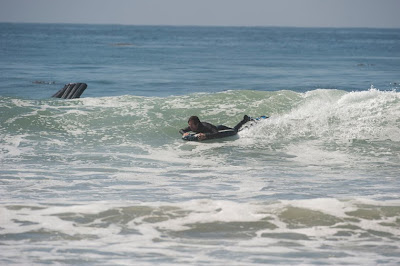 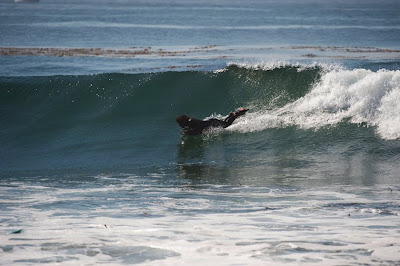 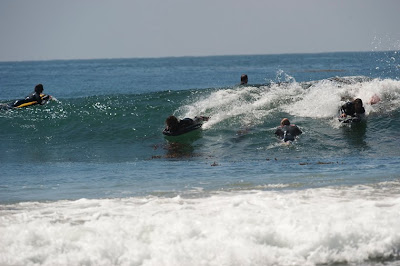 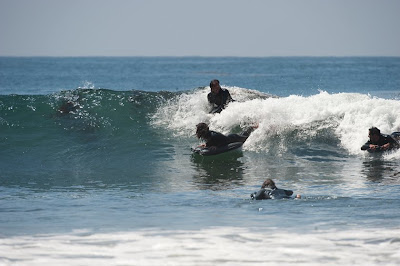 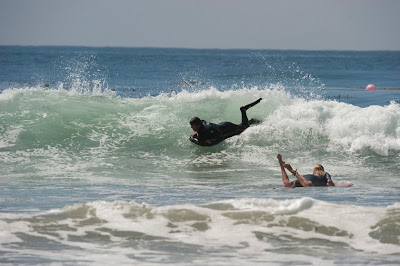 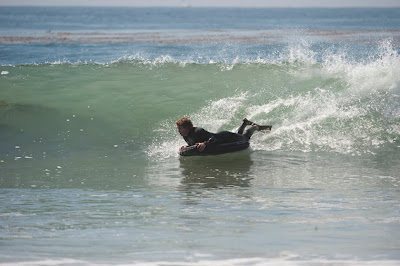 Photos by Ken Samuels
Posted by Surfsister at 12:20 PM 12 comments:

I'll be uploading the rest of the footage soon. This is just one clip for the people!

So nice to meet you all and share some smiles, sun, and waves! 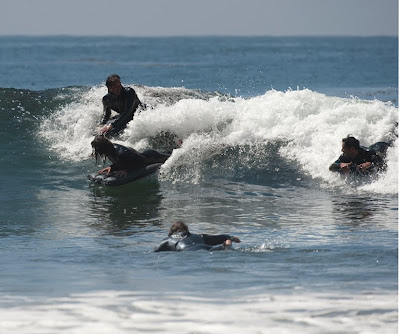 (Click on the picture to enlarge and see the smiles!)

Photo by Ken Samuels
Posted by Surfsister at 5:51 PM 7 comments:

On Vacation In My Mind...

Loving the mats and turning people onto them down here

Inflateable tripper, on vacation in my mind,

Sent from my iPhone

Yup
I live in a tent 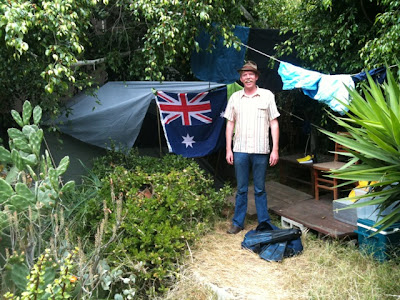 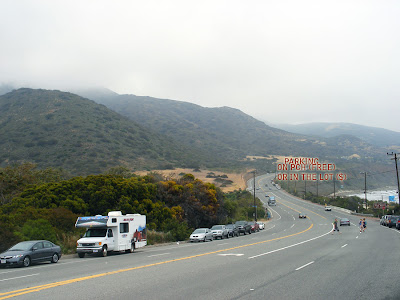 I know your friend is coming in to town later but the forecast looks really nice for this Sunday. Something to think about. Looks like interest in your idea is taking off. Very exciting!

Talk to me, people! What are your thoughts on these words of wisdom? In other words, any interest in doing this sooner rather than later? Frankly, I'm thinking we will do more than one this summer, so don't feel like this is the one and only.

After talking to those in the know, it's thought that the beach named after a famous thespian would be a better venue for what is now being called a flash mob mat meet. Consider yourselves in a holding pattern. Obviously, we are at the mercy of whatever swells materialize. I'd also like to have it after June 28, if possible, because one of my L.A. matting compatriots is off for a few weeks as of that date. So . . . that's all I've got for now. The picture below is all you need for the location. The ocean will dictate when this convergence of magic towels will take place. 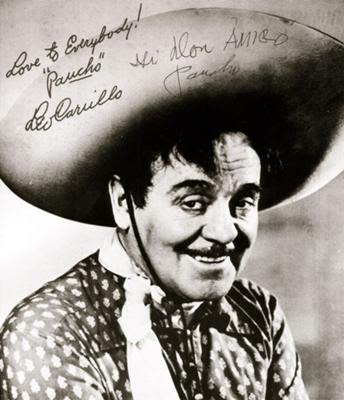 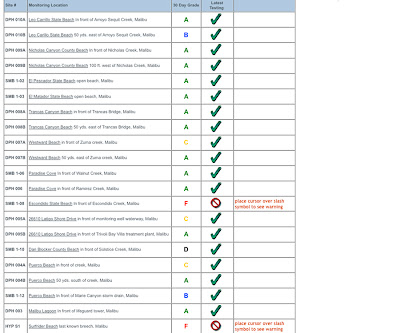 I'm thinking of trying for a spur of the moment mat meet, at some point this summer, here in L.A. County. I do not name spots in public, so all I can do is say a link to the spot is here.

The place does well on a seriously low tide with a SW swell. I rode the mat there yesterday. And it got me thinking about that place as a good venue for a mat meet. It has its own lot. You have to pay, but it's only $3.00 if you get there before 9 a.m. There are port-a-potties too. What I found most attractive is the fact that you can still get that wave on a mat without having to sit on the main takeoff spot with the surfers.

If we were to have a mat meet here, how many of you would be interested in coming?

DO NOT PUT THE NAME OF THIS SPOT ON YOUR COMMENTS. DO NOTHING THAT POINTS TO US AS PUTTING THE SPOT ON THE INTERNET MAP. WHEN YOU REFER TO IT, JUST SAY "THAT PLACE" OR "THAT SPOT" OR WHATEVER YOU LIKE. NO, I'M NOT KIDDING.
Posted by Surfsister at 1:20 PM 18 comments: 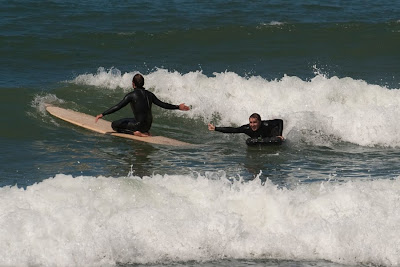 I met these two brothers (Andrew and Mark) while in the water yesterday at San O. They were so much fun!! This picture epitomizes their stoke.

(Photo by Ken Samuels)
Posted by Surfsister at 6:34 AM 3 comments: 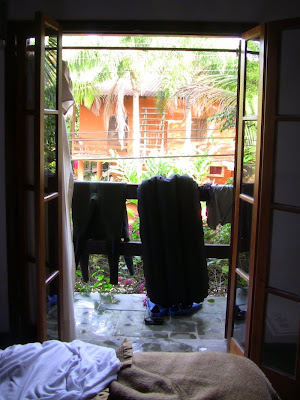 Just got out of the shower after a few pre-breakfast morning slides in Camburi, Brazil.

The mat always generates smiles/smirks (for whatever reasons) and often a little conversation from the local surfers in these parts.

"Ah, made for surfing, from California!? Those guys are always a step ahead."

Reminded me of a bumper sticker I read in Kiwi-land a while ago: "Mat Nerds - so far behind, we´re ahead!"

Hope all is well. 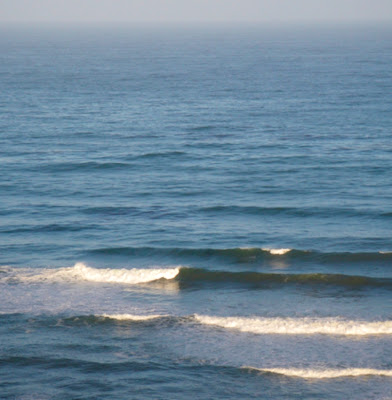 Hello, we hope that our email finds you doing well.

We have had some cleaner surf the last few days and it's been fun.

The two previous weeks had a lot of windswell. Steve and I were blessed to surf often together in the last few weeks.

On Thursday of last week we took our 4th Gear Flyers out to the left reef. The swell was mixed long period south and north west windswell, about five feet. The north wind was blowing at about 16 mph into the lefts. We kicked and swam out to the reef, bouncing over the one-two foot high wind chops in the channel. The water was about 57. I had blown my 4 GF Standard up pretty tight, and with the cold water, it lost some of its firmness and was going well on the cleaner middle-to-inside left walls. Steve was on the outside peak, catching the bombs and pulling into the pockets in the brisk wind, so I decided to catch a few outsiders, too. Haha! Whew!

It's amazing how fast the 4th Gear flyers go, and how much fun they are, even in crazy, windy conditions. Steve and I had a blast!

Here's a photo from the morning before the wind came up. We had to go off to work, and surf later in the wind.

We hope that you have a great day.

Love and Aloha,
Cher and Steve
Posted by Paul Gross at 4:58 AM No comments: 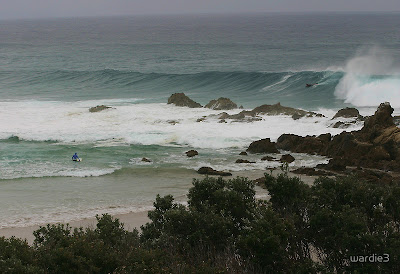 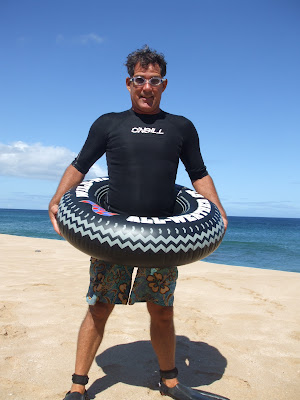 It's been a quite while since I've posted on Surfmatters. Close to a year has flown by since heading back down under after a year of exile from NZ in Hawaii due to an immigration department mixup. The past ten months have featured exclusively matting in mostly junk surf in New Zealand and Australia with the occasional decent session and very occasional classic days (Snapper Rocks!). Hawaii was amazing, with universally friendly people everywhere, adventures of total freedom to explore realms of untrammeled nature, and overflowing ultimate aloha! I miss Hawaii dearly, but would selfishly rather be in Aotearoa (Land of the Long White Cloud) at the moment due to lack of population, minimal authority and distance from radiation, among other things. Plus Mum and Dad and Angie, the best girl ever, are here.
One of the recent highlights is learning that mats can be turned down the face of the wave for more speed by unweighting and skidding the tail in order to avoid the drag caused by leaning over to change rails. This way the inside rail remains engaged so as to carry more energy forward to scoot around sections while preserving precious momentum. Turning by drifting is is basic to dirt biking and rally driving, which are very similar to surfmatting, with water being similar to soft soil. One really cool thing about matting is that your body can remain driving down the line while the mat is angling down the face to gather momentum. Keeping your body hurtling ahead while the mat angles downward allows gaining velocity while conserving energy so as to carry speed around whitewater. (Along this line I've found that concentrating on the totem of the flying squirrel in flight facilitates skimming across flat spots and and around foamy sections.)

Also, Mister Dirk recently commented on Dad's Flipper connection and my own delphine interactions. Mats have played a central role in these interspecies contacts due to the ability to rub the fabric of a mat to produce sounds that intrigue Dolphins, Orcas, Otters, Peguins... who then come around to say hello.

Right, well life carries on, and matting is an enduring pleasure. Needless to say I am super-stoked wishing that everyone out there is regularly getting fired up on mat surfing!!! From The Long Lost Mat Max... 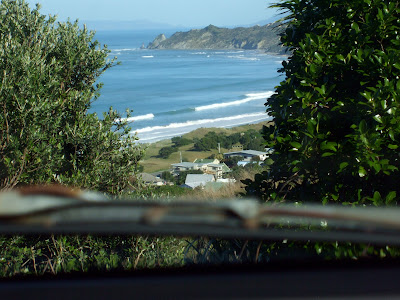 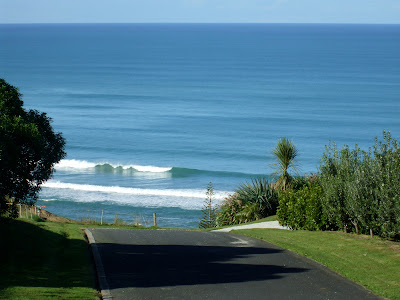 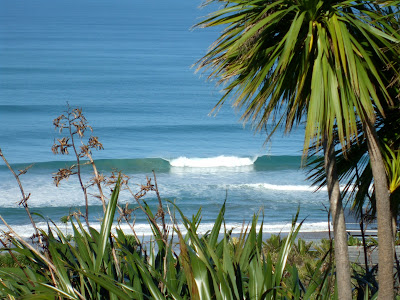 I shot some fresh pics today when I went to check on Angie's goats and calves in their borrowed million dollar paddock. The waves were a bit crumbly but nice to look at. First photos I've shot in quite a while...

Hoping all is good,