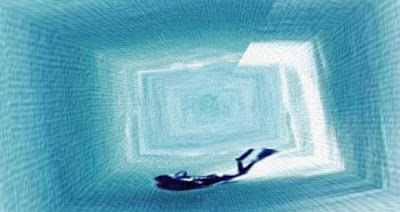 Why ride a mat? Hmm.

Well, it's a hoot! And they don't hurt like hardboards. There's more feedback than from a sponge. Mats go faster than bodysurfing. Surfmatting is rebelious in it's own way...
The big attraction is simply working out how to make the things go. There's a fair amount of thinking involved. And heaps of intuition is required to be sensitive enough to wring out the true performance potential.
Probably the most intriguing aspect is matching fabric to water in terms of form and tension. You have to actually sculpt the mat to work in partnership with the wave. Much more interactively than boarding. Here's part of how it works:
Waves stretch the surface of the sea as they move. Pitching waves pull tremendous water tension up the face. And lined up surf, especially bowling barrels, also pulls tension across the face in a horizontal direction. These lines of tension adhere to the fabric of a surfmat and pull it taught. It's this lateral tension effect that shifts a mat into the next gear, providing tremendous acceleration and traction -- while simultaneously manifesting a mysterious and unstoppable force of nature that inexorably, and universally, forces the rider's mouth into a ridiculously wide smile.
Air pressure in the mat must be in proportion to the suction on the fabric to really cooperate with the surface of the wave. As well as choosing proper air volume in the mat to start with, one must also monitor and adjust this pressure by squeezing the envelope to adapt to the constantly changing pull of tension as the wave morphs. (There will be a quiz on all this next time you go matting in quality surf.)
Small perfect surf is not all that tense, so low air volume suits it. Fatter waves like a fatter mat, so pump it up a bit. Big fat waves like a full mat. The more air the rounder the rail and the more suction to hold in for turning and tracking. Less air creates thinner rails for more speed/glide but less grip in steep faces and hard turns. For unknown reasons, squeezing a soft mat is not the same as riding a pumped up mat in gnarly waves. You have been warned as I was not. I went with a soft mat in sucking out shorebreak for a while until I saw the light an went ahead with a hard mat. Much better grip on the face and less sore neck from going over the falls. That's the beauty of it. -- You have to think for yourself. There's no set and forget with surfmats. It's fully interactive on all levels. Yes! That's what we like!!!
How you perch on a mat determines what the wave feels. And waves have feelings, as we have all experienced. There are infinite ways to place your various body parts on the mat. Inside elbow tucked alongside torso to make a clean hard rail line? Hands off the inside pontoon to allow it to shape itself? Pulling up on the forward pontoon tops to stretch the bottom fabric? Pushing down on the nose to flatten entry rocker? Squeezing the outer pontoon for traction? Pulling up on the outside edge for traction? Laying the mat flat to use the channels for traction?
This is the Zen game that makes matting such a endlessly educational pursuit!
And there's a bit of frontside/backside to deal with as well. Turn your shoulders one way and you're regular foot, twist the other way and you're goofy. Some people have a holdover forehand and backhand standup surfer advanatage/disability. Not me, as I learned how to switch stance as a grommie. But I use the concept of facing toward or away form the wave as a technique to deal with sections and such.
This is also accomplished by how one places one's hands on the mat. Hands replace feet for walking the mat. Pressure equals velocity. Push down and go. Push too hard and slow, because of making drag with protrusion on the hull. Isn't this great, actually having to design your own craft as you go? Well anyway, these are some of the facts of the matter. More soon...
Click on Mat Tech Talk on YouTube for more info on riding surfmats.

Fortunately, one can raise the pressure in a mat by squeezing it. For really small or extra smooth waves, I let out air until I can fold my mat to look like the number 7. Even less air often frees up the mat in little bowly waves. You can always compress the outer front corner with your fist to hang in through steep sections and make hard turns. 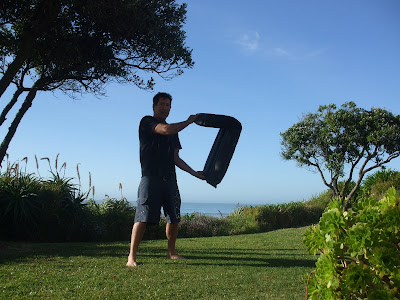 I find that the 90 degree L-bend is good for 3-4 footers. Then, as the power and steepness of the surf increases, I tend to add liberal amounts of air. For scary suckouts, I'll inflate my mat as hard as I think it will go without popping. A soft mat gets long glides and a hard mat will resist slides... 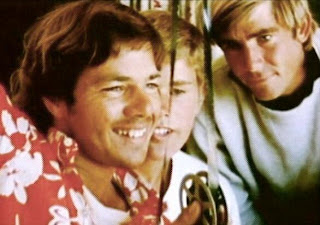 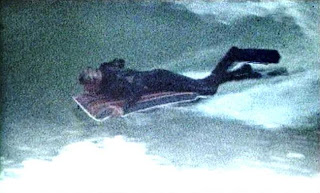 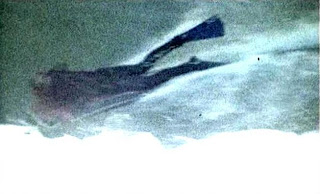 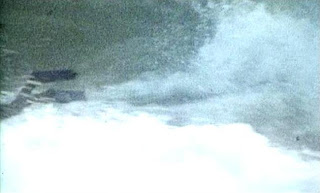 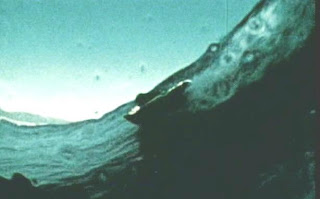 Undoubtedly the first hard core air mattress movie ever made, 1970's Rubber Duck Riders was a home movie in the best sense. It was made purely as a party film for George and his friends.

Some of the images in the film were point-of-view water shots taken by George, but the bulk of RDR was shot by film students from Brooks Institute of Photography. At George's invitation, they came down to the beach on a few occasions, and got some shots of George, Michael Cundith, the Brown brothers, and a couple of other local mat rats.
The running time was brief...about 8 minutes. But the cutting was tuned to the music, which was Keep On Chooglin' from Creedence Clearwater's second album, "Bayou Country." If you read the lyrics to Keep On Chooglin', http://www.metrolyrics.com/keep-on-chooglin-lyrics-creedence-clearwater-revival.html, well, they don't have much to do with mat surfing! But the throbbing beat really captures mat riding. http://www.youtube.com/watch?v=qsehyyYjVg0&feature=related
RDR was shot at Rincon, on the kind of days George loved best...with a southeast back wind cutting through it, keeping the crowds at home (at least back then.) The mats, of course, were Converse/Hodgman's. The riding was state of the art, and would remain so for the next 10 years.
The original footage that made up Rubber Duck Riders was disassembled and re-edited for the mat riding segment in Crystal Voyager. No prints of the original Rubber Duck Riders remain, but the footage is in C-V ...just watch it with Keep On Chooglin' on the turntable, and you'll get the idea! 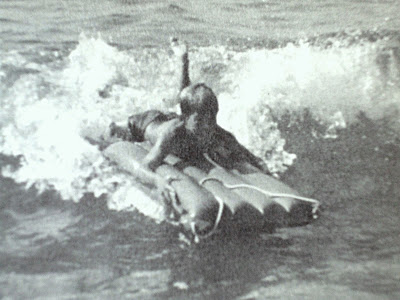 I grew up riding "rafts" in the sixties. During the seventies, canvas airmats faded out. Then, in the eighties, lightweight nylon mats came in! I thought they were the coolest thing ever. Very few people got what I was doing. Some surfers thought I was mad as a hatter... A mad matter... Mat Max! Maybe I was, getting ragdolled by shorebreak on an inflatable. But not to worry, I loved the feeling of surfing on air and knew exactly what I was up to.

Soon, a tiny core group of us got into playing surfing bumper cars, immensely enjoying our rediscovery of rafting. "Real surfers" shook their heads. Some even scoffed. We just laughed politely and carried on... Those days are long gone, and now I'm in New Zealand, where people can more easily get their head around a grown man riding a "lilo". I'm usually out there all alone on my floatie, sometimes sharing the lineup with orcas and penguins. And it's better than ever. The technology has really progressed, with comfortable traction decks, fully-developed designs and easy purchasability. I'm loving modern mat riding. Now, if only there were NZ matters to do go-behinds and slingshots and crossovers with... Give it time.

More people are getting it. There's a minor mat movement in progress. ASP Pros are freesurfing on mats. Surfmat websites and video clips are popping up on the net. Mat riding is generally well regarded in Australia (at least that's been my experience). Surfmatting is turning out to be not so mad after all.

A complete matting kit fits in a daypack. The whole operation is simple, small, friendly and huge fun. Anyone can buy top-quality mats for resonable prices through the internet, and have them shipped anywhere in the world in days.

Part of the reason for this blog is to turn people onto the joys surfmatting. More matters would be a good thing, as we are mostly empathetic types, with not all that much ego. Crowding is a non-issue, because on surfmats, it's way more fun to share waves than to go it alone. The zen focus inspired by mat surfing is a pure lighthearted meditation. I would tend to doubt that there is such person as a really serious matter. 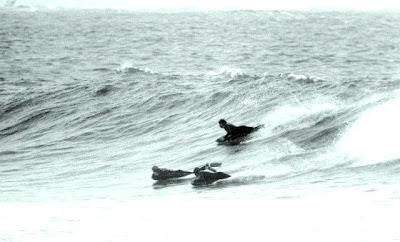 As for matting being a form of surf madess, the classic Jimmy Buffet lyric sums it up best, "If we weren't crazy, we'd all go insane." Maybe this lightweight, sociable, cheap and cheerful ethic is actually a metaphor for smaller and better things to come on Earth. Nonetheless, no matter how many matters there are, it's going to be our good clean fun little secret. Mainstreamers will most likely always be somewhat perplexed when they see us blow up our Neumatic Surfcraft or 4th Gear Flyer, or whatever inflatable debatable, and set out to explore the innermost limits of pure fun.
Posted by Pahl Dixon at 3:21 PM No comments:

"These shots were taken in 1977 in El Salvador. George G. and I were there working on the second unit for the production of 'Big Wednesday.' Along with Bud Browne and Dan Merkel, George was shooting water footage of Jerry Lopez, Bill Hamilton, Peter Townend and Ian Cairns. They were doubling for the actors who played the main characters.

Anyway, most of the primary shooting was done during "Golden Hour," which is (or was) Hollywood shorthand for the morning or evening. Around noon on this day, George talked Greg MacGillivray -- who was producing the second unit stuff -- into letting him take his waterproof 35mm military gun camera out and ride some waves with it on his back. The idea, obviously, was to try to get some point-of-view footage to intercut with the surf action.

No one could believe that George would even attempt to ride these waves on a mat, let alone with 15-plus pounds of camera on his back. The surf looks mushy in the photos, but it had a serious thump to it. And there was no surface tension on the face whatsoever...the worst kind of wave to ride a mat on. The sets were relentless that day too, and it was a battle for George just to get out through the white water kicking a mat with a large, heavy camera strapped to his back. I think he ended up only riding this one wave.

I sat up in the lifeguard tower with my still camera and banged off a few photos. Only a mat surfer could appreciate these shots. George was riding a stock Hodgman raft. In retrospect, it was too stiff, too wide, and too thin. And yet, look at that long, clean track! It was a graduate course on how to ride a mat...and I was lucky enough to be there to witness it.

As I recall, none of this footage ever got used in Big Wednesday. In fact, the entire El Salvador second unit production project yielded only a few shots in the final cut of the film."
Posted by Pahl Dixon at 9:31 PM 1 comment: