30 Years of Tinkering and Testing #1: Overview 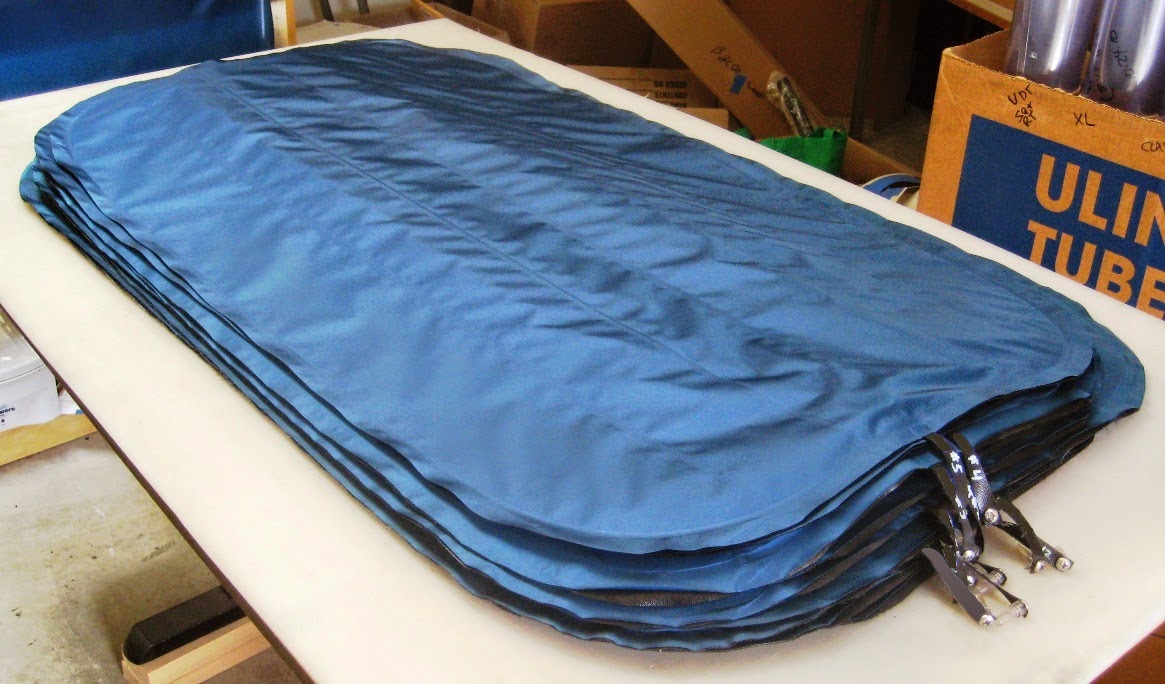 (This is a pile of prototypes for a 4GF model that never made the cut...)

4th Gear Flyer passed a milestone of sorts over Easter Weekend…we sold our 4000th mat since 1984. (Gloria’s a fastidious record keeper.) Add to that the 800+ prototypes and personal mats I’ve made since 1983, and we’re approaching the 5000 mark!
From the very beginning, I've taken a methodical approach to mat design. Part of the reason was the influence of George Greenough and Greg Liddle – two friends who each had an “engineering” perspective on board building -- and part of it was the nature of mat construction itself.

In spite of the fact that mats are made up of curved tubes when inflated, the “build parts” are all straight, square, and thus easily calibrated. And while it’s virtually impossible to handshape two identical surfboards, it’s relatively easy to build two identical mats. All the parts can be marked out in the style of a draftsman, then assembled and welded with great consistency. This means that it’s easy to replicate a good mat over and over again. Having the capacity to make surfing vehicles accurately was, and is, a great boon to mat design progress.

Of course, the down side of having complete control over the construction of a mat is that “happy mistakes” generally don’t happen. With hand shaped, hand glassed surfboards, there are so many natural variations from board to board that magic boards often appear without intention...and something new is learned from them. But when building a mat? That just doesn’t happen. You have to deliberately make changes from mat-to-mat to create variations. That’s why a methodical approach is natural.

When I was working out the final details of the Tracker Roundtail in the summer of 2010, I had the general design in place after about a dozen prototypes…but the height of the two small I-Beams hadn’t been fully sorted. So I built six more prototypes with an I-Beam height variation of 1/8” from mat to mat…starting with what I thought would be too tall to what I thought would be too small. After sitting in dry dock for a week or so, the surf came up and I rode all 6 prototypes on the same afternoon…making mental notes after every few waves. One I-Beam height emerged as being distinctly better. I ran the same test with those 6 mats early the next morning, and drew the same conclusion. Since the best I-Beam height for the Tracker was in the middle of the range I tested, I knew I’d found the right one.

Maybe the oddest thing about design is that a "magic mat" invariably comes from a tedious process of tinkering. There’s no artistic inspiration -- as there often is with board shaping -- since mats tend to look the same even when they perform differently. So it comes down to taking the time (and spending the money) to build and test all the options to figure out what it takes to birth a magic mat. Not fun. Not pretty. But a good result.


With so many mats under the 4th Gear Flyer belt, I thought this might be a good time to go through some of the specific design variations that have been tested over the years. I'll post something on the subject once or twice a week for the next month or so!
Posted by Paul Gross at 11:52 PM

Thanks for that. I can't wait to read it. Congratulations on your success and thanks for all the fun.

4000+ mats! Awesome Paul. Your supreme efforts over the years are very much appreciated!

So stoked that 4GF has turned out to be what it is. Sometimes I wonder how life would have been for the past 30 years without Gloria and PG and their nylon mats. Less fun and interesting for sure. Thankfully a few thousand clever people are onto a very good thing. Lucky us! Mat Max

Sitting and watching five summer stories last night I keep thinking how much more fun I would have had if I had been into the mats in 72. Bali and Maui would have been a whole different experience! Thanks for the mats and thanks for all the time, effort and money spent on R&D

This is going to be good! And my thanks too, Paul, for all the work you've done. These years of mat surfing will be the best!