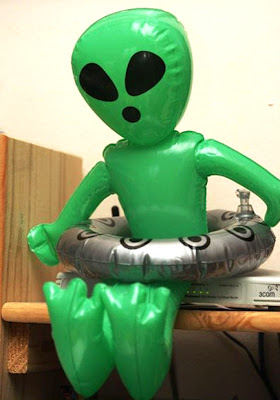 This video was captured by an unidentified documentary film maker, who was transformed into one of the aliens after shooting this remarkable footage.

"It's not so bad being an alien pod," he commented later at Thanksgiving dinner at the home of his horrified human parents. "My new gills allow me to duck dive for unlimited periods of time. And frankly, I like having organic flippers instead of feet. Greg Deets will just have to deal with the loss of this customer!"
Posted by Paul Gross at 11:17 PM