Some Inflatable History, From Bicycle Times ... 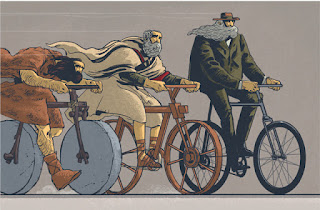 The year was 1887. John Boyd Dunlop was doing what is assumed most 47-year-old men in Belfast, Ireland were doing in the late 19th century: sitting on the porch waiting for the pub to open.

He gazed out to the street outside his house. Dunlop Junior was following his doctor’s orders by taking his tricycle for a ride — apparently standard treatment for a head cold at the time. Dunlop watched his son grimace with pain as every bounce of the trike’s solid, rubber tires over the cobblestone street sent a shockwave through his son’s spine and hands.

As a veterinarian, Dunlop had a penchant for relieving creatures of their misery. And this is exactly what he decided to do for his son (though presumably using a different method than that which he would use for a horse with a broken leg). In a moment of brilliance (or laziness), he grabbed the object nearest to him, which happened to be an old garden hose. At the time, he had no idea that the tattered, rubber hose would not only change his son’s life, but also his own and that of millions of others for hundreds of years to come.

Dunlop cut the hose into long strips, glued them to the wheels of the tricycle and inflated them with a soccer ball pump. Both father and son were amazed as Dunlop Junior glided over the cobbles more smoothly and comfortably than ever before. In fact, Dunlop was so happy with the results that he soon fixed wheels of the same design to his own bicycle.

He took his bike down to Cherryvale Sports Ground in South Belfast for a test ride. Also at Cherryvale that day was young William Hume, captain of the Belfast Cruisers Cycling Club. Hume watched on with bemusement and curiosity, as this solidly built man — impeccably dressed in a waistcoat and top hat, the wind splitting his long, white beard down the middle and blowing it back on to either side of his neck – cycled on these strange, oversized, puffy wheels. Little did Hume know that this odd-looking fellow would provide him with an unprecedented competitive edge, and place him forever in the annals of cycling.

Dunlop, however, knew what he had stumbled upon and he rode down to the patent office in late 1888. He queued next to a man who had come up with an inventive way of extracting corks from bottles, and another who had devised a way of extracting drinks from glasses. The latter called his invention the straw. Dunlop quietly scoffed and muttered to himself, “Pfft, that’ll never catch on.”
He soon cycled home on the “pneumatic tires” for which he held the patent…or so he thought. Dunlop wasted little time in establishing his first tire manufacturing plant in Belfast in 1889. And once his tires hit the market, who should walk in to buy the first set? None other than Willie Hume.

Eyeing the opportunity for some free marketing, Dunlop suggested that Hume use the tires at the upcoming Queen’s College Sports competition, to which Hume agreed. On the day of the big event, Hume was ridiculed with vicious taunts such as “sausage wheels.” But he held his nerve to win all four of his races — quelling the naysayers and turning plenty of heads in the process.

One important head he turned was that of William Harvey du Cros, a local paper manufacturer and entrepreneur. He was so impressed with Hume’s success that he approached Dunlop with a business proposition. Dunlop, taken with du Cros’ moxy, accepted his proposal and the pair established the Dunlop Rubber Company in 1890.

With bicycles now commonplace and nicknamed “boneshakers,” and automobiles just coming onto the scene, Dunlop and du Cros’ timing could not have been better. The same could not be said for Dunlop’s fellow Scotsman, Robert William Thomson, who had obtained the patent for his own version of the pneumatic tire 44 years prior. Despite having performed excellently on a group of carriages in London, Thomson’s tires, which he dubbed “aerial wheels,” faced an untenable lack of demand and were put on the shelf.

Once the patent offices around the world caught up with their paperwork, Dunlop’s patent was declared invalid. Fortunately though, he was permitted to continue manufacturing his tires and by 1893, after only three years in production, virtually every butt on a bicycle was thanking John Dunlop for a smoother, faster and more comfortable ride. And they’re still thanking him today.
Posted by Paul Gross at 11:04 PM