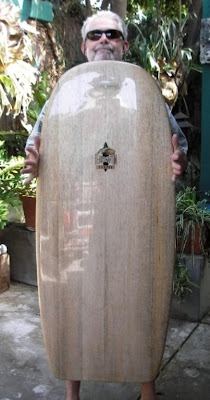 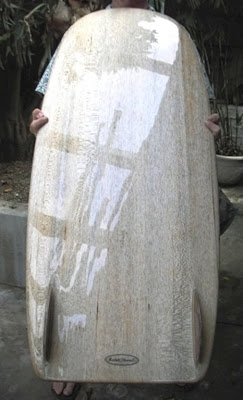 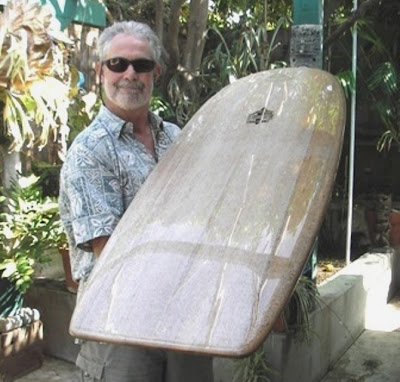 Sort of don't want to show you this, knowing you're still mostly landlocked but...

Here's a few shots of the finished Terry Martin balsa board.

It came out so pretty, my wife didn't want me to even get it wet! But we compromised and I'll keep it in the house when I'm not using it.

Terry's super talented BIL John Cherry had a pair of Simmons profile keel fins left over from one of the repro's they'd done together, and he cut them down just a bit to fit the smaller shape...and did a bitchen bead on the edge...

I made the blank from some really stout balsa I found at my usual yard in Santa Ana. Terry said it was the hardest, densest balsa he's ever worked. And that's from the guy who's going on 75,000+ surfboards!

And even though Moonlight's superb glass job was fairly light...it still weighs 18lbs! The wood's so tough the guys at Moonlight said it will be VERY hard to ding it. It even has chatoyance!

The only problem I have with the weight is lugging it up hills after a surf! Paddling out, it flattens the whitewater right down and being so dense, it duck dives real easy.

On a wave, once it's over the edge it really wants to GOOOOO! It rides like a souped up Cadillac!

It tasted it's first salt last weekend, at the paipo gathering at Plaskett Creek. We had a great time. The weather and waves were just OK, but we still enjoyed excellent surroundings, company and grinds.

That thing is killer!