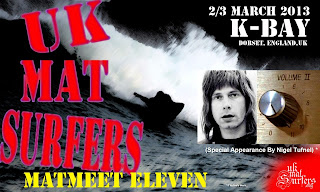 Haha, could combine the two and do stonehenge on the way back!

Time to start praying for a decent south swell...

Just got a text message from Nigel...thought you might be interested, since you losers can only dream about having the kind of friends I barely have time for!

Apparantly, the UKMS mob got it in their lizard brains that I would show up at one of their little social gatherings. Like I have time for that sort of rubbish.

The last time I made a personal appearance was in Japan in '07, to promote my latest solo album, 'AKA 47,' which celebrates my love of Russian fire arms, anonymity, and very large, silicone breasts.

Did the Tunisian twins I sent over for you work out, Charlie?

So there you have it, mat geeks. No way in hell Nigel is turning up at your shindig. Sit on it and spin.

And to think I have a ticket booked, passport updated and the dimensions of Casper written down.

I've already splashed out on the rider! Any idea how hard it is yo get crocodile eggs up here? :-(