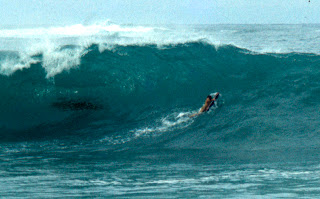 Hi Paul
Just got back from NZ. No waves with the mat yet but thought you might like this shot I dug out when I was in NZ of me paddling up a wave in Hawaii on a hodgeman mat.

Also found this image from 1973 and thought you would like a look... 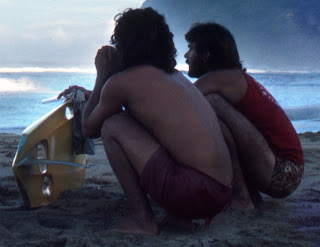 Greg talking to Viny at Polhale State Park Beach, Kauai, Hawaii, about the jet chambers - the idea of the holes in his board was that they suck air from the deck under the tail and give extra drive - Notice the asymmetric nature of the board chimes and the single jet chamber near the front - so the board was specifically designed to straight and fast on rights. Only ever seen one of these boards and it went like the clappers.
Also found pther image of me on the hodgeman... 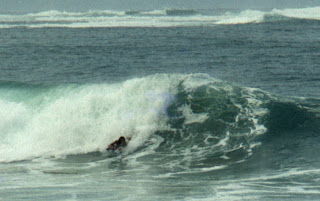 Cheers, Lloyd
Posted by Paul Gross at 9:54 AM