Tips From The Pros: One Arm Swim-In Takeoff

All is well here. Lots and lots of fun surfs on the SS Standard and Polara. I wish I were able to offer you new feedback, but really, I haven't any. Almost wrote a few times to describe particular sessions, but in the main, I missed much of the winter's bigger swells due to work, and this spring and summer have been pretty unremarkable in SF/SC.

Yet of course, each go out has been rich, enjoyable, therapeutic. Lots of goofy misadventures: lost a mat in sizable Lane surf after dark, a spooky swim and then to my amazement, the deflated mat was in the foamy shallows by the steps, black smudge against streetlight sparkle-black... stoked!!!! Locked the keys in the car at Kelly's and had to beg a surly Muni bus driver for a ride home in dripping wetsuit... stuff like that :) I think it's a combination of something intrinsic about mat surfing and about becoming an aging surfer, but surfing seems more and more about the entire experience surrounding the ride as much as the ride itself, and I love it.


Anyway, I'd love to pass on this bit of info on Surfmatters, if you see fit. Just the kindest regards to you, and as always, a huge measure of gratitude for your surf toys! 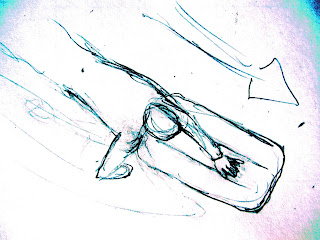 Rendering of the below described technique. Pen and ink on a piece of paper. Jonathan Hess. 2017.

I've been wanting to share with my fellow mat enthusiasts the technique for catching waves by swimming in (as opposed to kicking only). For me, it's a much better way to get in the wave, and has numerous advantages.


1. Approach the wave however you do- kicking, paddling, whatever.

2. When you're where you want to start paddling, slide off the back of the mat. Pivot toward shore.

3. Reach out one arm- probably your writing-hand side- onto the mat (since I'm a lefty, I've drawn it and will describe it how I do it, right-handers just flip my description). Body in water up to left armpit, chin on mat. I've got the root of my left arm resting in the left side crease formed by the pontoons, angling toward the center... my fingers spread to lightly grip the width of the center pontoon.

4. Swim, kicking and stroking with the free arm.

5. When you feel yourself being pulled by the wave, pull yourself forward in a one-arm version of the usual "pop forward". I'm sorry if this seems a cop-out, but this is hard to describe technically. Basically, you're momentarily putting weight on your forward hand and simultaneously giving an extra kick- really, almost like what you do normally with two hands forward.

That's it. It's really not hard; I spent one session learning it. Pick a day with surf with a decent amount of push. It's all about getting a feel for using your extra available body length power (which is awesome!), developing the feel for when you're planing sufficiently to "pop forward", and popping forward with the one arm only, which is a lot less daunting than it seems.

I feel there's nothing but advantages to this technique over kicking in. You can catch the wave much earlier; you can get up to speed faster, and you'll move faster than you would kicking. When lining up the wave, you can paddle closer to the optimal spot before turning; instead of the hooking circle you make when kicking, with your body straight down in the water you can pivot on a dime. You can use soft, light, short fins because of the greater efficiency of having your core helping you kick.

And I'm of the opinion that swimming long, strong strokes is a more elegant way to catch the wave than frantically kicking, making a big, messy wake- to my mind, more in keeping with the cetacean elegance of the mat ride itself.

Thanks for sharing Jonathan! Sharing is part of the whole experience, too. Can't wait to try it! Just about anything will improve my minuscule mat skills.
Speedshaper

Very interesting. What kind of air pressure are you using?

About a 5/8 bend. It might be good to practice it the first times with higher inflation levels.

Thanks so much for this. I am definitely giving it a go.

This is a handplane video, but it illustrates the idea well...