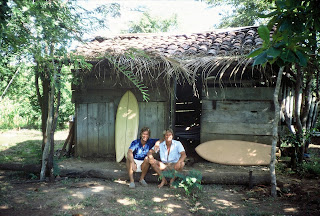 How about a nice weekend yarn?

So the year was 1967, and Stan Pleskunas had given me my first real kneeboard.  Up to then I was riding a belly board I'd made with the help of my brother-in-law in his mom's yard.  I'd never heard of "blanks" and I got the yellowed foam from an insulation company!  That board was sort of doomed from the start, but I had fun on it.  Stevie Lis was dying laughing when I told him I got the foam from Ridout Co.  "No, Kenny, you get the foam at a surf shop!"

For some time I'd admired the advanced surfing of Stan and Stevie when they showed up at South OB, and was thrilled when Stan gifted me his board, though it was a bit thrashed.  His VW van "Flash" had been T-boned in OB, with this board in back, pinballing around in there as the van tumbled.  Stan was unscathed, but the board had so many holes Stan had just filled them all with wax.  No matter, it still worked for me.

The fish was soon to arrive on the scene, but hadn't quite yet, and this was a soft-railed, round eggy thing that turned wonderfully, and really sped down the line, even in its impaired condition. I was surfing Ab one late afternoon when I took a bad wipe and lost it.  Leashes were also yet to be invented, and anyway I never would've used one.  I looked all up and down the beach in vain.  Thinking I might get a better view from the top of the cliff, I went up there and ran into Wilbur Crane.  As the sun set and I paced and lamented, Will says, quite prophetically as my life turned out, "Hey, forget about the board.  I saw this guy, George Greenough, at Pipeline riding a mat. You ought to get yourself a mat."  I thought, "A mat?  No, I want a real board."  And went on home, dejected.

Meanwhile Alan Seramur and buddies are two reefs down at New Break and find my board floating in the channel between there and Chasms.  They figure I'm dead, and lacking a body, decide to have a funeral of sorts at Nubes and bury the board there!  I love the fact no calls were made, either to rescue-type authorities or my mom.  "Oh, bummer. Kenny died.  Let's just bury his board.  Anyone got another dube?"

The next day at school Alan was quite surprised to see me alive and well.  He told me the story, as well as the whereabouts of my ad hoc grave.  I went down after school and dug up the Lazarus board, which was now on its second rebirth...

There you have it!

I always thought Chicama would be a good wave to mat. Confirmed!

Yeeeeewwww! Kenny's got me Stoked this morning, thanks for sharing you Joy with us!

John always had apricot colored Lis fishes. I miss surfing with him.

Thanks for sharing a bit of story with us!

You guys remind me of two kneeboarders that appeared at my local spot called Leftovers on the north shore of Oahu In the early 70s. Up until then I had never seen anyone get so barreled there. They also did some nice roundhouse cutbacks too...kinda wondered if if was you two...