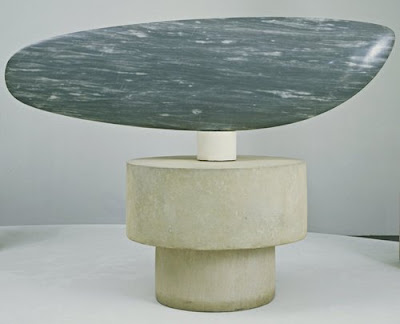 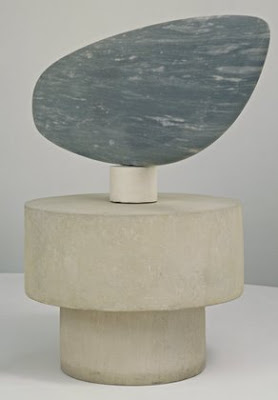 Went to a museum (the MoMa in NYC) the other day. While browsing on the fifth floor I stumbled upon this object. "Surf/fin/board shape!!" is what came into my mind immediatly.

"Fish"
Paris 1930
Constantin Brancusi (French, born Romania. 1876-1957)
Blue-gray marble 21 x 71 x 5 1/2", on three-part pedestal of one marble 5 1/8" high, and two limestone cylinders 13" high and 11" high x 32 1/8" diameter at widest point.
Less an image of a fish than an embodiment of the idea of one, Fish conjures the animal's liquid course by simplifying details like fin and scale, tail and head, into smooth streamline. ("Simplicity," Brancusi believed, "is not an end in art, but we usually arrive at simplicity as we approach the true sense of things.") The material too contributes: a blue-gray marble veined with flecks of flowing white, its surface intimates both movement through water and moving water itself.

Brancusi was fascinated by animals, and believed in the primacy of animal consciousness. In reducing animals to elemental shapes, he felt he was approaching the essence of nature. Also, like a number of European artists of his period, he was excited by art from outside the classical tradition so influential in Western aesthetics. The art of Africa, Native America, and the Pacific, and also the art of prehistory (including Cycladic sculpture, a particular influence on Brancusi), took imaginative liberties with human and animal bodies, alternately exaggerating, attenuating, and eliminating their features. These examples liberated Brancusi and others in their treatment of form.

By the time he made Fish, in fact, Brancusi seems almost to have left form behind altogether, for something more incorporeal: what he described as the fish's "speed, its floating, flashing body seen through the water . . . the flash of its spirit."

=right on
Brancusi would have been a magic towel devotee