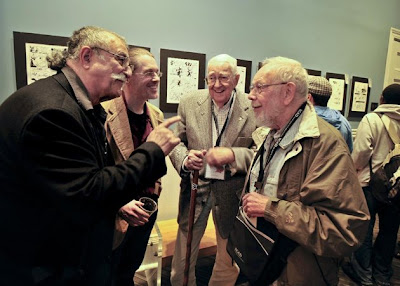 SAVANNAH, Ga. (AP) — Think of them as the senior class of the "usual gang of idiots." Or the original MAD men perhaps.

There's Al Jaffee, who at 90 still draws the optical illusion fold-in gags for MAD magazine's back page. And Sergio Aragones, still whipping out eye-straining and gut-busting miniature cartoons in the magazine's margins after 48 years. And Jack Davis, who was there at the beginning, drawing the horror spoof "Hoohah!" that appeared in MAD's debut issue in 1952.

They're among the cartoonists who put MAD on the map in the 1950s. Over the next six decades, they blended celebrity caricature, pop-culture parody and political satire in a way that would influence American comedy from Saturday Night Live to The Onion and more. And some of them are still churning out gags for MAD, in defiance of the ever-expanding generation gap with the magazine's young audience.

"I have kids come to me at conventions saying, 'My grandfather grew up with your work,'" said Aragones, 74, whose recent features include "A MAD Look at Lady Gaga." "Older people think the older MADs were funnier. But not really. You grew up. Your sense of humor has changed."

Aragones, Jaffee and Davis were among eight veteran MAD contributors gathering Saturday for a rare reunion on the Georgia coast. With their homes and studios spread across the U.S., the artists who put their work side by side in hundreds of MAD issues don't often meet face to face.

This weekend, the cartoonists are being honored and humored by their hosts, the Savannah College of Art and Design and the National Cartoonists Society. Their art is hanging in a gallery, while their schedule includes workshops with the college's art students and a panel discussion on MAD's history and their work.

"MAD, to me, was really the first print publication to satire popular culture and American political culture," said Lowe, 44. "It is still very edgy. I can see parents wanting to keep it out of the hands of their children. And children wanting to get it in their hands."

Launched in 1952 by comics publisher William M. Gaines and editor-writer Harvey Kurtzman, MAD evolved from stories spoofing its owners' stable of horror comics to a broader range of send-ups lampooning American culture, celebrities and politics. By 1956 the magazine had a gap-toothed mascot, Alfred E. Newman, who soon became a cartoon icon.

The artists worked on a freelance basis, but Gaines rewarded their loyalty with annual group trips overseas for decades, beginning with a trip to Haiti in 1960. Davis recalled being cajoled by Aragones into fighting a bull — a very young one without horns, he admits — in Spain. Jaffee still laughs at how a MAD writer, during a tour of the Sistine Chapel in Vatican City, shattered the hushed reverence by remarking aloud that Michelangelo's painted ceiling was so priceless that God couldn't afford the rent.

MAD's stable of artists and writers embraced the group moniker "the usual gang of idiots." Now published by DC Comics, MAD similarly downplays its own influence. On its website, MAD touts its success as "the best-selling magazine in the world with that title."

"They didn't think this crappy little magazine would last this long," Jaffee said from New York. "However, I think MAD is challenging Time for longevity."

And perhaps, in an offbeat way, challenging Time in stature?

Jaffee's MAD fold-ins — which have jabbed at everything from the Beatles and the Vietnam War to TMZ and "The Jersey Shore" — recently received the kind of star treatment normally reserved for major literary works. In September, Jaffee's entire 36-year run of some 400 fold-ins was collected in a hefty, $125 set of four hardbound books, a package he called "hernia-inducing."

While Jaffee and Aragones still work to keep pace with MAD's younger audience. Davis, 86, chose to end his more than half-century affiliation with the magazine more than two years ago.

"I'm an old stodgy man and pretty conservative," Davis said. "I like all the guys up there a lot, but I felt like it kind of got a little raunchy."

For those who remain, Aragones says, decades at the drawing board honing the razor edge of humor has kept the cartoonists feeling young — an energetically meeting deadlines.

Known as "the world's fastest cartoonist," Aragones reckons he's drawn 12,000 cartoons for the margins of MAD magazine since 1963. When he travels to Savannah, Aragones said, the deadlines won't stop as he writes on the flight from Los Angeles and draws at his hotel.

"It's not stressful," Aragones said. "Being a cartoonist is taking out all your frustrations on paper. You don't have to get road rage. You just draw a cartoon."
Posted by Paul Gross at 1:40 PM

Wonderful crew. Those guys sure had an influence on me and my friends. Those of us who drew studied every single mark of each artist's pen, and developed a feel by copying each style. I met Aragones a couple of times, and even went to his Ojai studio once in the 80s. I'n glad to see that they all can still get together and hail one another : )

i loved spy vs spy and the lighter side of. i spent all my cash on mad mags and bubble gum cigs the ones that blow gum dust that looks like smoke

My spawn and his best friend wore Spy vs. Spy costumes for Halloween. It was wonderful to see. What was cool was that other kids at the school knew who they were!

they also surf who only stand on waves..mad,.circa 66