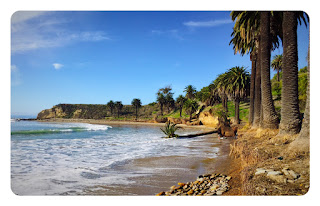 The palm trees along Refugio Beach are succumbing to the high tides. This one fell overnight. Campers reported that it was leaning but still rooted last night at 10:00. Surf has been really good, and combined with high tides, the coast is getting scoured away faster than ever.

These trees are nearly 100 years old, and they survived weather events like the massive swell of 1969.

I went up there before dawn this morning, and I was the 2nd person in the water. Wave conditions were excellent -- glassy, fairly big, and very consistent. After I rode 3 fun ones, I pushed deeper into the break zone, not too far off the outer rocks.

I had just pulled myself into a resting position on my surf mat to recover my breath when I got a clear view of a shark's dorsal fin about 30 feet outside of me, trolling steadily down the coast. Judging by the shape, the ragged trailing edge, and the size, I'm guessing it was a 6-9' great white. I didn't feel anything but ice cold surprise, no fear. However, without hesitation I also turned and bolted for the rocks, about 70 feet away. I looked back over my shoulder and the shark maintained the same cruising speed but swung a turn and came directly at me. Again, no fear, but I pondered a series of outcomes and responses, all bad. More sprinting and another look over my shoulder, but there was no shark to be seen. I was in the foamy break zone by then, but still in pretty deep water.

The other surfer was coming back out within earshot, so I yelled that I spotted a shark. In a few more seconds I was standing in waist deep water, and the other guy and I stood and watched for a while. No more sightings. By then surfers were piling into the water in droves, and I mentioned it to several, but nobody even paused. I went back out but then the fear set in and I was too sketched to surf properly. I kept scanning everywhere, and when underwater kelp bumped me I flinched hard. So I gave up.

A couple of hours later my friend Paul arrived, the crowds had peaked and waned, and the waves were going off. We both went out for a long productive session together -- testing two versions of a new mat design -- and I re-calibrated myself back to normal.

One thing that comes to mind, in the cool logic that follows this kind of event, was something that George G has touted for years... if you see a shark, swim towards it in a calm, deliberate manner. The message is that you aren't afraid. He's still around after over 60 years in the water, so there must be something to it...but I'm not going to be the one to try it!
Posted by Paul Gross at 6:08 PM

Love that place. Love it

Good to hear you survived that encounter Dirk! GG's shark stories article is a most enlightening and useful read . I often find myself scanning the water from the vantage point of the sun on my back as his advice is that is where an attack will come from. Could I paddle slowly and calmly straight towards a white pointer? I fear not!