This Dutch documentary may not hold up by conventional critical standards, but it's an interesting snapshot of a very candid Zappa, and the era of the early 70's.

What amazes me about Frank Zappa's music is how well it holds up, without the rose colored filter of nostalgia. (At least, that's my view.) So does much of his social commentary. I recall just before he died, he was a critic of the populist downside of the internet...which is interesting, since the internet barely existed in the 1993. Pretty perceptive. 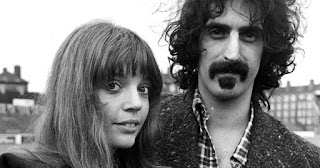 He was a super musician too. Way ahead of his time.

Thanks for that. Just Another... was maybe my 3rd childhood LP, I think I can quote every line from Billy the Mountain.

There's a lot to admire about his work. His testifying during the PMRC hearings was wonderful; watching him apply his wit and intelligence to defending free expression of ideas to a bunch of condescending congressmen was and is (via YouTube) exhilarating. Miss Christopher Hitchens for the same reasons.

Thanks for this Paul. Just another band from LA was a fave. Overnight Sensation.
All of it!
Of the several times I got to see him, the show at Old Robertson Gym at UCSB in 73 stands out. I was 14! With George Benson and the Underwoods if my memory serves me well.
Highly suggested is the book "No Commercial Potential, the strange and terrible saga of the Mother of Invention"

Great stuff. The Muffin Man is seated at the table
In the laboratory of the Utility Muffin
Research Kitchen . . .
Reaching for an oversized chrome spoon
He gathers an intimate quantity of dried muffin remnants
And brushing his scapular aside
Proceeds to dump these inside of his shirt. . .
He turns to us and speaks: