Tips From The Pros: Fin/Foot Interface ...

OK, considering it's from moi, maybe this doesn't qualify as a "tip from a pro." So bear with me...

I've found that a pair of fins, even if they each were cast out of the same mold at the same time, can vary slightly in temper. The hand laid charges of rubber that are placed in the mold prior to heating aren't perfect, so each fin can have a different feel. And since our feet are not identical to one another, every now and then, one fin will fit one foot better than the other.

What I do, when I get a new pair of fins, is swap them back and forth between feet to see if there's a closer match of one fin to one foot. If so, I mark the fins accordingly.

Of course, this only applies to a brand of fins that aren't molded specifically for a right and left foot.

If there's no discernible difference between two new fins, then I arbitrarily mark the fins 'right' and 'left.' The theory is that, over time, each fin will conform slightly to each foot. 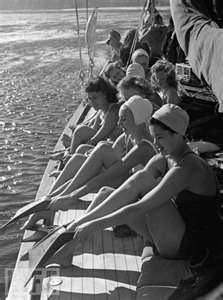 Actually,if you switch fins between feet,they tend to last longer due to reducing flex and stress in specific areas.

Very interesting, have those Duck Feet been foiled down on the ends? And did the tips bend naturally? Or did you give them some treatment? Thanks Paul, Peter G

No Peter, these are unaltered Duckfeet. Well used, but unaltered!

I was wondering if the U-deets are still around? I use them with soft sole booties and have modified them quite a bit.

I use DaFin heel straps with my UDeeTs so my fins have a L/R as a result of that. I've noticed a definite breaking in of the foot pockets to suit the foot they are on so definitely worth keeping them the same way around.