From The Tusked Beast

Hi Paul, how are you? Hope you got waves during the most recent swell.

I was talking Wedge (a discrete subset of surf babble) with a friend of mine, Steve, who grew up in the Corona Del Mar area. He shared a couple of mat photos from his teenage years.
First is from his favorite spot (not the Wedge), a bike ride from where he lived. He wrote:
"Great fast left at times.  Good cliff jump too.  Resident seal gang bodysurfing on same waves.  Lost my virginity and lots of brain cells there.  Ah, youth... " 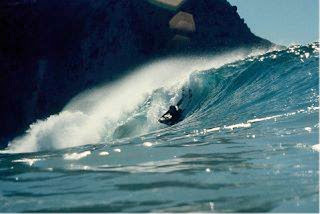 Photo: Woody Woodworth
I asked him to elaborate. Exercising discretion, he wrote:
"That photo from mid-1970s. And actually, my late great friend Tom Delorenzo and I had running argument over if it was his shot of me or vice-versa.  The rafts were those old striped ones, I forget make, but we called them “rubber ducks” and sometimes glassed 2 small fins into the bottom (before twin-fin boards, even).  Which sometimes fell off.  These were mainly the standard ride at Big Corona jetty, “off the end” when big south swells hit, before anybody rode actual boards there (or at the Wedge, for that matter). Warm water, rarely with wetsuits, so beyond the rocks of the jettys, nipple rash was the main hazard.  Plus big debates over whether Duck Feet or Churchill’s were better fins... "
Steve attached a second pic: 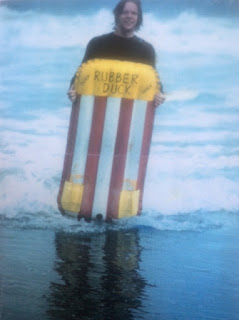