Last Sunday's mat meet was just what I needed. Never having ridden a mat with anyone before—and never having ridden a mat more than a few times or in head high waves—I needed to see how it is you make these things go. I am, and have always been, an observational learner when it comes to athletic endeavors. You can describe a thing to me until you're blue in the face, but I can't mimic the action being explained if I don't see it . . . in action. The mat meet let me get up close and personal with fantastic mat riders in big waves.

After all was said and done on Sunday, Valerie and I decided we'd get together today to ride mats. My surf friends would have been shocked. I've got nine boards in my quiver, but I left the house without a surfboard. It was going to be all about the mat. Period.

It was decided we'd head to Newport as Val said some of the beaches are blackballed and would be perfect for mats since the bodyboarders usually filled those lineups.

I don't even know where to begin. I guess I should brag that I finally did something other than go straight. I am a goofy foot surfer, so I can spot a left before the left even forms. And I got it! And I actually went left!! I ended up far enough up the beach that I got out and walked back . . . beaming!

Because I'm a surfer first, there were many things about the mat that I just couldn't wrap my head around prior to the mat meet. Dropping in was confusing. For some reason, I thought and expected the mat to remain straight when one drops in. Thankfully, one of the images that stuck with me from Sunday was Mattitude dropping into a wave. I remember thinking, "Is he doing a dolphin kick or something?" It finally occurred to me that he was just following the mat. The mat was folding over for the drop in and his body followed. So today, when I went for waves, I followed the mat. (Note to self: it's not a surfboard! The mat will flex . . . a lot!)

What also helped today was that these waves were smaller than those at Cottons. Even though they seemed a bit daunting, I had little fear. I'd seen big waves on Sunday. I'd survived those waves. Therefore, the waves I saw today didn't faze me much. The crowd didn't either. I've slowly evolved into a bit of an aggressive surfer over the last year. While I don't snake people, I have no patience for those who drop in on me. And there was a snake out there today. In order to keep him from taking waves I felt were mine, I just went for it. Damn the scary drop in! Damn the fear about not knowing what to do once the mat took off! My wave! Back off, snake!!

Suffice it to say, I'm going to go out on a limb and say today's Women Only Mat Meet (WOMM) was a success. We were out there mixing it up with the spongers. Unfortunately, we didn't exactly mat together. I hate crowds and will always stay on a less populated peak. Val, on the other hand, saw how the main peak was breaking and put herself right in the thick of things. 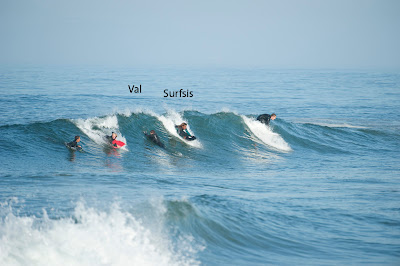 Look!! I actually dropped in, didn't fall off the mat and had my eyes open! I am so stoked after today's session. There were many "a ha!!!" moments—duck diving, dropping in, realizing that kicking works*, etc. The only reason I got out of the water was because I got slammed to the sea floor headfirst. I'm not one to tempt fate. She who mats and runs away, lives to mat another day (sung to the tune of Bob Marley's song "Heathen"). 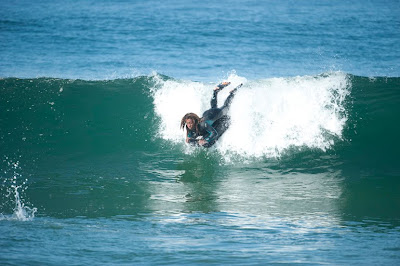 * I realized, after the Cottons meet, that kicking is totally foreign to me. As a surfer, I only use my legs to steer the board. As a swimmer, I've adopted the swimming technique that involves little or no kicking. Therefore, kicking one's feet while in the water seemed wrong. That's one of the reasons I had trouble at Cottons. I was barely kicking. Today, however, was different. I put my legs to work. Eureka!! 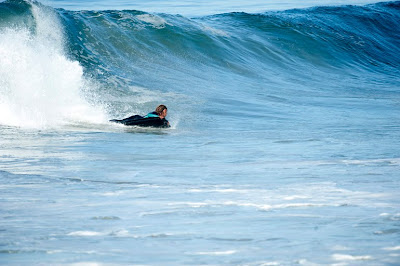 Posted by Surfsister at 1:27 PM

Lookin good Mary! Too bad it was a WOMM though ... Remember me and Mattitude live about 20 minutes from newport :) ....

Uh oh! I think I can sense a mat surreptitiously elevating itself up the order of the "What should I take out to ride today?" decision universe!

Wow I was a little shocked to read
"I'm a surfer first" WAOOOHTHEFUETC.
Any person riding a wave in the ocean is surfing. Prone first then Kneeling then standing.

I'm really glad to hear you've had a "Eureka Session". My I've been lucky enough to be in the company of two mat surfers who've had them in the last week. So cool getting stoked off other peoples' stoked.

Thanks for the great post Mary! I'll be taking out my mat along with my favorite 7' 10" Vaquero manana!