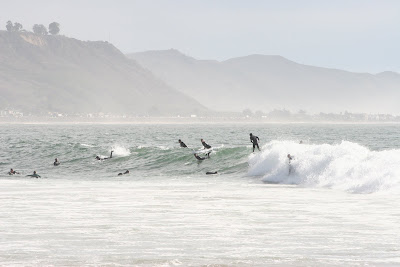 (Spence is out there somewheres...seriously dude!)

I just got a session on the Tracker Roundtail...

The bouys were reporting 12-13 ft. at 15 seconds but the direction was something like 310 degrees, too north for anywhere around here. I remember something John Bradbury said however, that there were Ranch swells and Rincon swells and it always seems Rincon picks up more Northerly swells better than anywhere in Ventura. Big winds outside made for a considerable South backwind bump and slopped up everything, and the bump only got worse as I headed up the coast. In fact, nowhere was really showing much of anything until La Conchita showed some whitewater on the rocks under the pier at high tide. But, as I rounded the sweeping turn at Mussel Shoals I could see the backs of waves in the Cove.

It was high tide and sloppy, I wouldn't even have stopped if I didn't have the mat. The cove was handling things best with sets through to the sand for the patient, but really bumpy. I was surprised that anybody was out, and there were about 20. But nobody, maybe 3 or 4, at the Indicator so I decided to give it a go. The first thing I notice about the Tracker is the heft, and it seems quite a bit bigger than the original Standard. Love the texture of the canvas deck, just enough grip.

It's sloppy indeed at Indicator but there are a few peaks. My first wave was forgettable, fair enough since I haven't been on a mat in I can't remember. But then I got a couple of waves that connected across the creek mouth. It catches waves easily and reminds me of the 9'4" spoon or perhaps a longer 7 foot range hull; very stable and seems to have a lot of glide. I connected sections that would have left me dead in the water on other mats...and especially on a surfboard.

I surfed for about and hour then kicked down to the cove. After few minutes I caught a wave from the glass house to the beach on the inside, connecting section after section, cutting back after big bottom turns, and left the water with a big smile.

I love the feeling of holding on to HORSEPOWER when the mats cut loose and start to squirt across the face of a wave. There is nothing like it.

Mission accomplished. Thanks so much Paul. I can't wait for more South wind.