Surf Sister at the Cove... 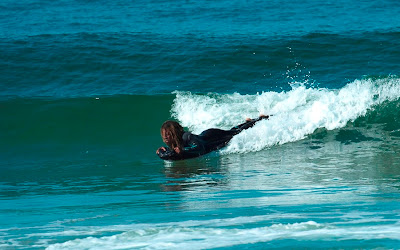 I had a mind-blowing mat session at The Cove today. Yes, I finally took my mat out there. For awhile, I was the only one out. I was eventually joined by one surfer. Truly, truly mind-blowing. I got the mat on a wave with shape, one where I had time to think about what I wanted to do, one that didn't closeout as soon as I dropped in.

I want to get another mat; I was on the Standard. What do you suggest (since the Fatty is too wide for me)?

Oh my god!! It was just amazing. I still can't quite get the rail to dig in once I've squeezed the corner, but I know that will come with me learning to throw some serious body language around. Fucking awesome!! Aaaaaaaaaaaaaaaaaahhhhhhhhhh!!

I went back to The Cove today. In fact, I didn't even bother to put the board on the car. It was the mat or nothing.

I got skunked. The swell backed off a bit and the tide was even higher than yesterday. It didn't matter though. As you know, I'd been talking about taking the mat out at The Cove for awhile now. Once I saw it was empty, I realized it was then or never. I slowly walked down there barefoot. I usually wear shoes on that trail, but lately it's just seemed easier to go without them. I hate taking soaked shoes home. And I can easily clean my feet. It's much harder to deal with wet, muddy shoes. Anyway, I made my way down. At one point, I even started running. I was that excited about this session. And everything just fell into place. The entire session was wonderful. I didn't even mind having the mat ripped out of my hands. When I swan in to look for it, there it was in the bay, waiting for me (just as my surfboards so since I usually surf The Cove without a leash). That walk back up the trail was intense. All kinds of thoughts were running through my head. More than anything, I remember walking felt different. I guess that's because I didn't stand for 90 minutes. And I was in no rush to get to the car. I was lost in thought. Again, my mind was blown. I can still see some of that session in slow motion. Being that close to the wave is amazing.

Paul, I didn't even put a surfboard on the car!!! Mind obliterated!

Do yourself a favour and get a Roundtail Tracker SS!

Oh.my.god. Me. The mat. The fins. The waves. Speechless.

There should be a warned printed on the mats. Something official and ominous "WARNING. You hold in your hands a surf craft that my induce mind expanding visions and dreams. Use may result in a perfectly good hardboard quiver being left to gather dust in your garage. Rider assumes complete responsibility for any side effects from it's use"

Surfsister you have finally lost it! you have just slipped past the point of no return! WELCOME.

It all comes with time, it took me a while before the bug really hit. I have had a neumatic for a few years but never really got the feel for it even though I would have fun riding it. I really think that the canvas topped 4th gears have shortened the learning curve to the mat, its a much more stable surface. After some time on the 4th gear I can now properly use the neumatic and am so stoked about it.

I think pranaglider is right about the surfboards collecting dust, thats exactly what has happened since getting the Tracker Roundtail.

" I really think that the canvas topped 4th gears have shortened the learning curve to the mat, its a much more stable surface. After some time on the 4th gear I can now properly use the neumatic and am so stoked about it."

What a great point Tim.

Surf Sis, I'm really pleased to see you go through the transition. I posted about mine a while ago... Won't be long now. :)

By the way, I really don't like the use of the word "surfer" being used to define standing up.

Yep, you left something at the border, no need for it now...instead, A kelp Goddess will be carved in your honor.In our village you are always welcome!

LESider, what do you have on the deck of your Neumatic? I put extra Volkem on mine and it immediately felt like it was part of my body. Once you get the hump-up into riding position the rest is right there...