Piskian made a comment (rather flippantly!) regarding my swim fins in the film clip on the "Lost and Found" post﻿:
"Pretty flippy-floppy fins you had there, mate!" 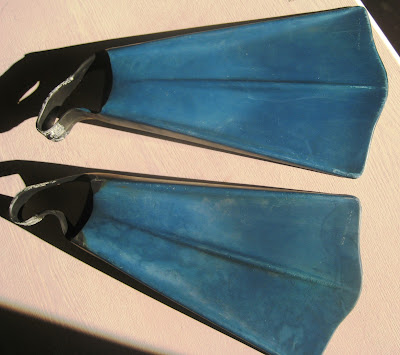 The mold number was important, because Voit used at least a half dozen different molds for each size Duck Foot...and each mold had a slightly different foot pocket configuration, which made a difference when you used them on a daily basis. George and I used to look for specific mold numbers when we bought new fins, and oddly enough, the same size and mold number fit our respective feet properly. Just a weird coincidence.

When they stopped making Duck Feet from the original rubber configuration (in the early 80's,) we scrounged every surf shop in So Cal and Oahu for about a year, buying up as many pairs as we could of our favorite mold numbers (1244 and 1355.) We were sorry we didn't start the search earlier, as we only netted maybe 5 pairs each, which lasted a good ten years. 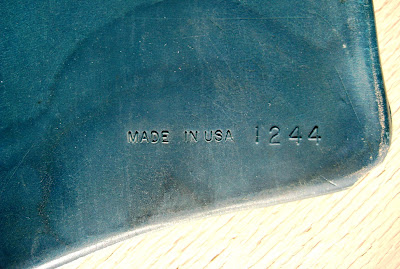 The next-gen of Duck feet had stiffer blades and softer foot pockets, which were more comfortable when you first used them, but over time, they were hard on your feet...since the softer tops allowed your toes to distort the pocket, and that caused painful friction between your toes and the pocket. The harder rubber in the old foot pocket was actually easier to use once you got your foot accustomed to them -- or if you used wet suit booties -- since the pocket held it's shape better.

We used to grind down the ribs on the blades of the "new" Duck Feet to soften the tip flex, and used plastic inserts inside the top of the foot pockets stiffen that area...all in an attempt to replicate the old design. But with the ribs flattened out, they didn't hold in as well. The dark blue rubber on the old fin (right) was of medium stiffness. The light blue rubber on the newer fin (left) is quite stiff. The black rubber on both fins is very soft. You can see where the newer fin's foot pocket is entirely soft. 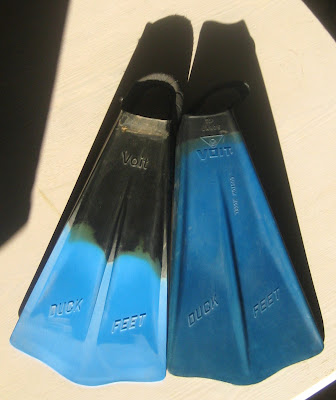 I still use the same modifying techniques on the UDT's... 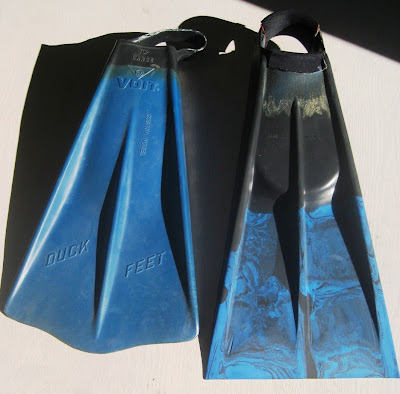 The original Duck Foot is a gorgeous fin, IMO!

The flex of my current UDTs and a "good" old Duck Foot is very similar...I keep the old fin handy when I'm working over a new fin with a grinder to monitor the progression of the tip flex. 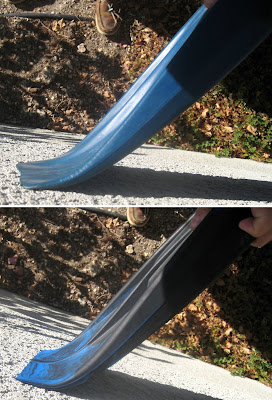 Of course, many of today's current fin designs have stiffer blades, but the entire fin is designed around that idea, so they work fine. Personally, I like using the UDT's as a blank, because they are long, and the quality of the rubber is excellent. I'm able to trim/shape them to my liking...but that's a lot of work!
Posted by Paul Gross at 5:00 PM

Great stuff! Fins are such and interesting yet personal topic.

Great post!! I don't have a pair of UDT's as yet, but i do love seeing how people customize things to make them thier own.

Interesting stuff Paul,I bought a pair of duck feet ebay USA and they were made in Mexico and the number is 2796 the tips on these are very soft similar to your originals.
Stu.

I've inadvertently set the rubber fetishists all off again,oh no.

I question the "inadvertant" aspect of your s%#t-stirring, Ian!!!

My hero-worshiping instincts are screaming "find vintage duck feet on ebay, asap! And if there are none of the appropriate serial number available, order UDTs for modification!"

But then I remember that I'm so overwhelmed by the simplest aspects of mat-surfing that fins wont make much of a difference.

Thanks anyway, PG. Maybe some day...

when PG talks, pay careful attention to what he say/shares. this fin segment is ,again, one of those gems of info selflessly passed on to those who listen. decades of work and research( particular mold numbers? who the frick else would ever pay attention to that kinda stuff?)all laid out here for all to see. that's one of the many things i miss about being able to personally interact with PG like we use to when he was building me boards. i ALWAYS learned something new from him each day in regards to surfing tech stuff.
el vaquero

One of the worst things about the modern surfing age is that you can always buy a solution to your problem. It's always someone elses solution though.