...but not much in the way of historical detail. I spent about an hour on the net this morning seeing what I could find about the history of UDT swim fins made by Voit Rubber Company, and ended up more confused than ever. So, there's work to be done, or maybe someone out there has first hand knowledge they could pass along. 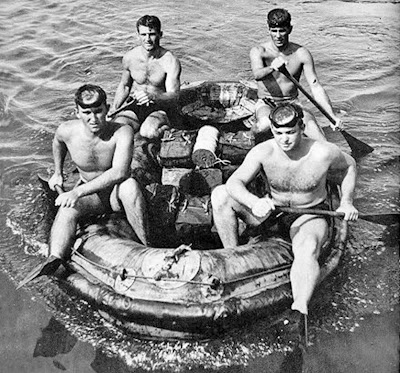 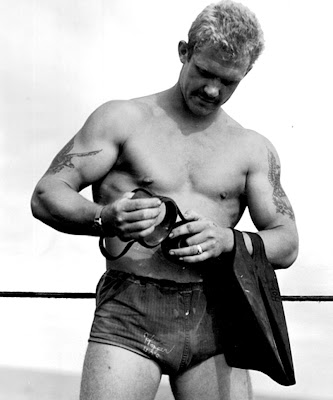 Churchill fins were the first to be used in U.S. military application, from what I can discern. These shots are from WWII, but no specific date was given. 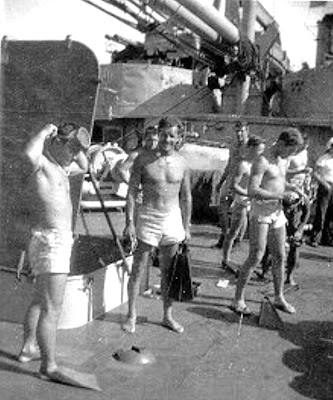 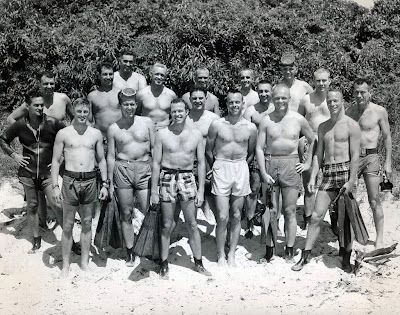 Two "transitional era" photos, when both Churchills and UDTs appear to be in use by the Navy Seals. Again, no date given. The earliest clearly dated photo I could find depicting what appear to be UDT fins in military use is 1950. Those suits look like a nightmare to use... 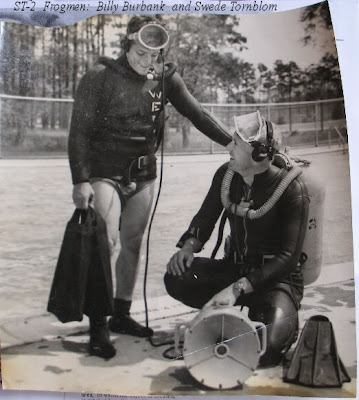 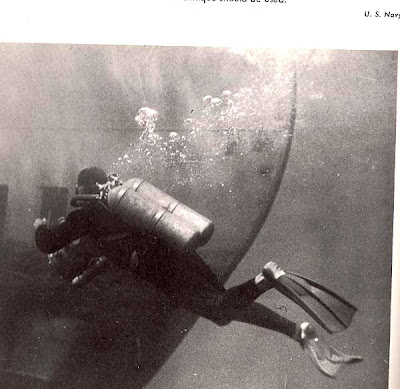 No date on this photo, just the US Navy ID in the corner. It's hard to bend a UDT fins with your hands, so either this guy is really strong, or they were using softer rubber back when this was taken. Maybe an experienced diver could date the scuba gear? 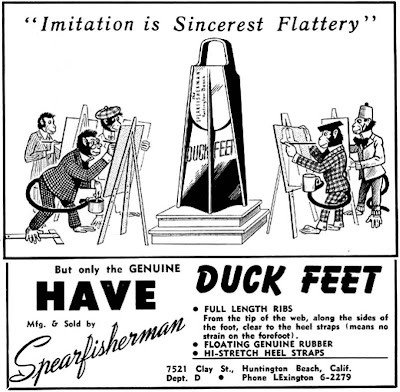 No date on this print advert, but I looks pre-1960. The fins are called "Duck Feet," yet the manufacturer is not "Voit," but "Spearfisherman." Some Wikipedia clarification is here... 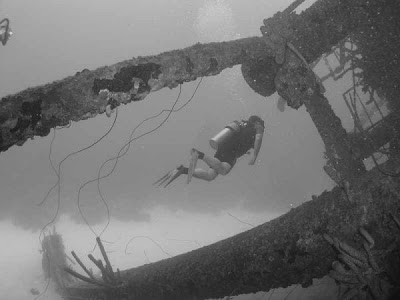 This is from a vintage diving site...look like UDTs to me. 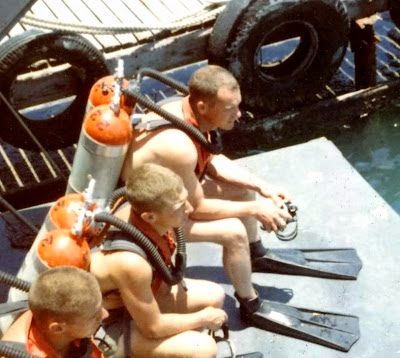 This is a Vietnam era photo, showing Navy Seals with UDT's. 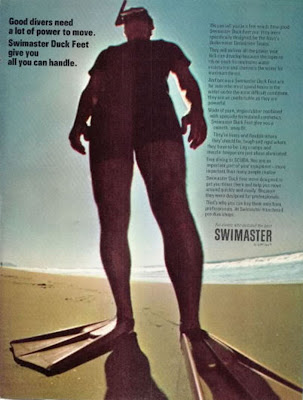 I would date this ad as mid-70's, based on the graphics. (Just an educated guess.) Swimaster was Voit's dive company name, and the fins, which are what we call UDTs, were called Duck Feet in the ad. The smaller, sleeker surfing/swimming Duck Feet were at least 10 years old by this point, so I'm not sure why they used the same name. Maybe because diving and surfing were two different marketing demographics? 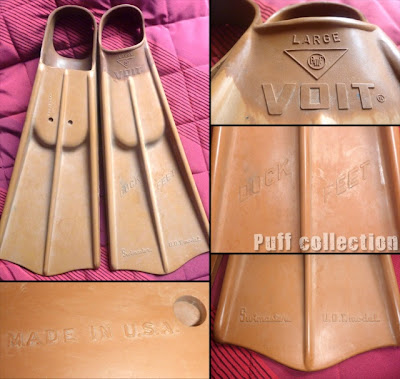 The same brown Swimaster UDTs as shown in the above print ad. No date on the photo, unfortunately. 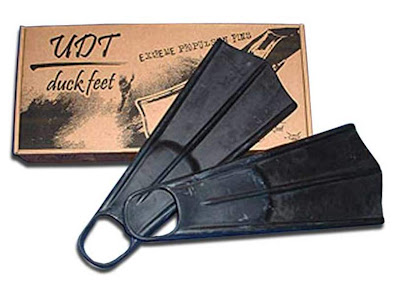 Even the modern UDTs have the Duck Foot name on the shipping box. 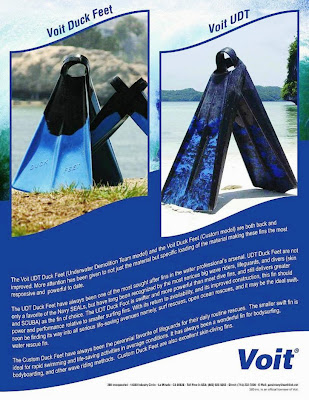 This Voit ad, which is recent, makes the clear distinction between Duck Feet and UDTs.
Posted by Paul Gross at 3:04 PM

Don't know any of that history, but you just reminded me that I have 3 pairs of UDT swim trunks stashed in the garage somewhere. If that look ever comes into vogue, I'm set.

I keep meaning to go back to the Charlestown museum. Has a good selection of old Churchill's, etc.

Other picture with divers wearing orange top bottles are USAF Pararescues during instruction in 1967. This one was taken by a friend who was PJ's in the late 60's at the Under Water Swimming School in 1967 precisely.

Got my mits on those all brown UDTs. New old stock. Super soft. With flat surf, they're still in the bucket. Film at 11.

I'm writing a swim fin history article for my online bodysurfing magazine (SwellLinesMag.com) and was looking through your great collection of photos. The photo of the group on the beach labeled as Navy Seals with Churchills and UDTs struck me.

I recognized some of the faces and then realized that those are the Mercury Seven astronauts!!! Across the front row: the first Americans in space! This photo was taken between 1960-1963.

I'm also a serious space nerd so this connection between my two passions is thrilling!

You're right! I hadn't noticed it, but those are indeed the Mercury 7!

"Unknown man", if you need help for your article, I'm your man... Be my guest.

Puff, shoot me an email swelllinesmag@gmail.com.

I'm finishing up the article and would appreciate a once over from someone knowledgeable.
Thanks!

The "Vietnam era" photo above is mine, taken at the U.S. Naval School for Underwater Swimmers, Key West, Florida in 1967. The divers pictured are in fact USAF Pararescue trainees, not Navy. The fins were AMF Voit Duck Feet fins, issued to us.

I have used, and still have, two pair of the original Swimaster Duck Feet fins, which are made of natural gum rubber, and are still very nice and flexible more than fifty years later.

The shot with the astronauts is fun. Most are NOT Team guys. You can tell by their swimsuits. UDT swim trunks are all we ever wore. The guy in the front row on the left definitely IS. He’s wearing UDT swim trunks with web belt and K-Bar knife. We always wore our watches on our right wrist, because we didn’t want the snare to catch our watch during cast and recovery ops. On his left wrist he’s wearing a compass and depth gauge. He recently got out of the water since his trunks are still wet. I don’t know his name, but it’s likely he’s East Coast, UDT 22.

The dark haired guy on the far left in the wetsuit top is Corney Leyden. He was a master chief in UDT 22 when I was there from ‘67-71. He was our diving Department chief and knew tons about all three of our diving rigs and kept us all current. Corney is wearing issue booties that we’re a MUST with Duck Feet, because the fins would tear up your feet without them.

We just posted this last email on our Surfmatters blog, 9/13/21. Let us know if there's any further insights or details into the Voit UDT fins.

If ya had weak hip flexors the UDT fins were not for you . Stiff, heavy but plenty thrust . A True Frogman fin