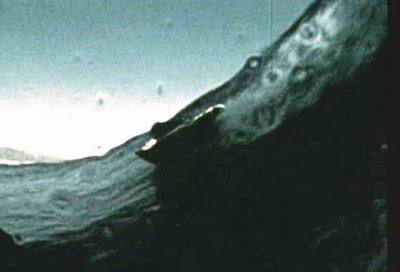 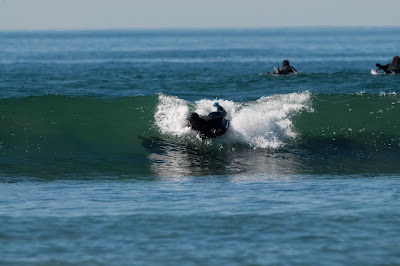 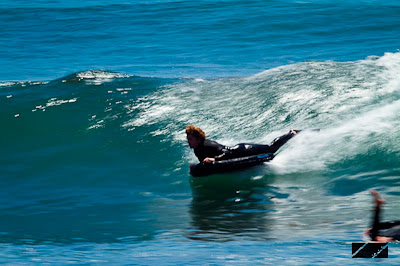 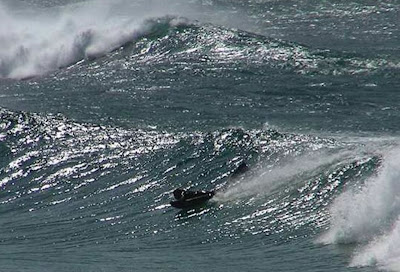 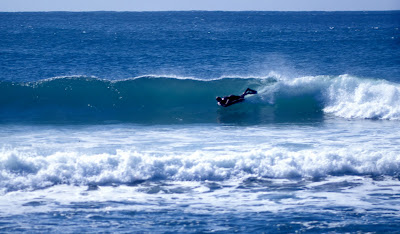 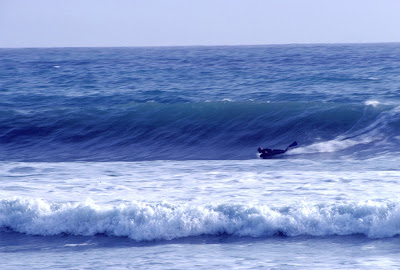 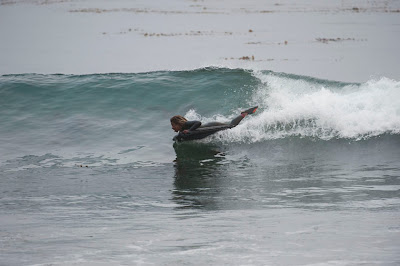 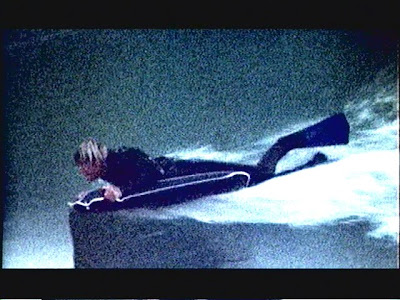 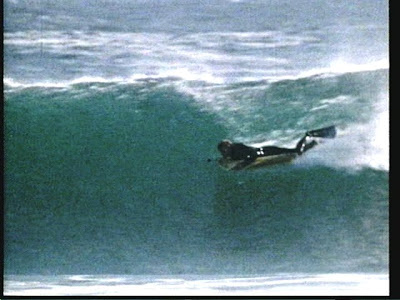 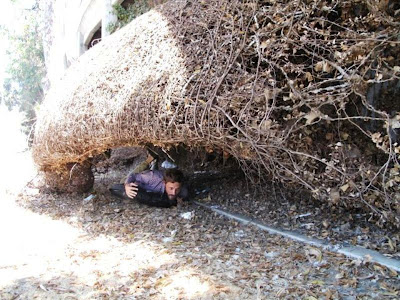 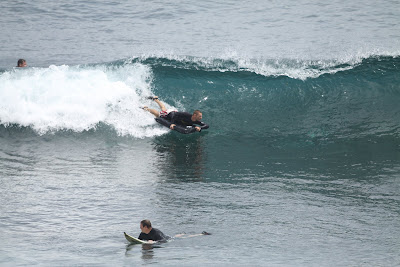 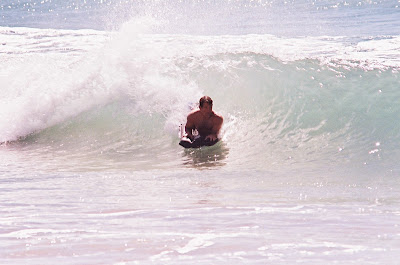 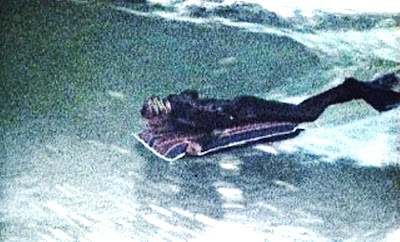 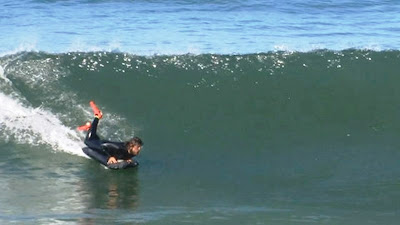 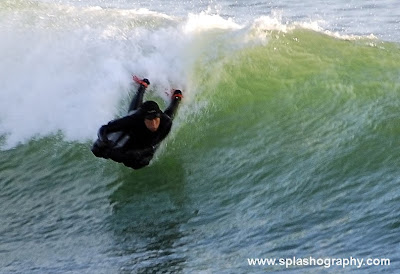 George called the other evening, and we ended up talking about mat surfing...will wonders ever cease!

One of the areas we wondered off on is how important it is for mat riders to position themselves towards the inside rail to minimize the wetted surface area. It's better to load up the inside pontoons rather than distribute your weight evenly across the entire width. Of course, there are exceptions to this "rule," but it's a general truth, nonetheless.

This was one of the key elements of George's amazing riding technique, which he developed the 50's and 60's, that unlocked the potential of mat riding. You can see from the older photos of him posted above (riding striped Hodgmans and the yellow Merrin) how far he pushed this concept.

In terms of the design of 4GF mats, one of the things we've always worked on is getting the I-Beam "stagger" correct for each model...the stagger being the difference between the height of the small I-Beams that separate the pontoons and the overall thickness. When the small I-Beams are too short, the mat becomes overly sensitive to the lateral weight shifts of the rider, and makes it hard to find the sweet spot in terms of positioning. If the small I-Beams are too tall, then the rider's side-to-side weight shift produces a lessened positive effect. Which is why George's positioning on the Hodgman's was so extreme. The I-Beams were too tall, making those mats too "stiff" width-wise. Smaller I-beams would have loosened them up a bit and made them easier to ride. (This is one of the many areas of design we were able to address with the 4GF.)

The ideal stagger can only be determined by feel when test riding prototypes. No mathematical formula seems to work...each model calls for a different stagger. Mat designs with the right stagger just want to move across the wall without any fussing around on the part of the rider. You pull yourself up on the mat after catching the wave, and naturally fall into the right spot.

Anyway, I was thinking about our phone conversation from the other evening, and figured it might be a good topic to toss out there.
Posted by Paul Gross at 8:51 PM

I remember when I was still trying to learn to weight that inside rail. I knew it was the key to moving to the next level in my mat riding, but I just couldn't figure out how to do it (especially since I rode the mat alone and without the benefit of learning while watching other mat riders). I am not even sure when I figured it all out. I just know that learning to do it changed EVERYTHING.

The funny thing is that I still go out and work on doing it. I don't, and can't, take that skill for granted since it is, in my mind, the key to positioning yourself for a speedy run down the face of a wave. So, I often go out and practice it on days when the waves truly suck. Even when there's no shoulder to ride, I still work on the drop in and the engaging of that inside rail.

What a design post! I have things to say... I need to work out what they are though...

Personally,I try hard not to think about mat technique.It throws me off,literally and physically!I have no idea what I'm doing most of the time,and it seems to work!

Good point Pickian. You are either the type that obsesses about every facet (I belong in that group, we have meetings on Wed. unless it rains then we meet on Tues.) or you can just go out and do. I suppose there are those well adjusted souls that go with a measured approach, blending both theory and experience but what is the fun in that.

what about the Clippers PG!
talk about loading up the inside rail :-O
what are the gold and purple to do?
I want to go matting with CP3

Great post! I am still fairly new to mat riding, but I am getting better. This post is great, because I have been recently thinking about and working on this very thing. I have mainly been a bodyboarder, so "leaning" onto the rail was important.
A few weeks ago when I saw an old school picture of Pat Caldwell riding "wounded duck style" (hips forward, weight on the rail not in the center, with the inside hand dragging on the face of the wave), the bodyboard was planing like crazy. I thought maybe that technique (or a slightly modified one) could work very well on the mat.
From what I read about it on the internet, it was the way some old paipo riders used to ride bodyboards, but went out of style. So I have begun riding my mat this way with a slight modification for the mat and have had excellent results in both speed and control.