Today is the winter solstice in the Norther Hemisphere, and the conventional sentiment goes something along the lines of, "This is the shortest day of the year."

But, it's also longest night of the year!

Since we have a lot of time in the dark tonight, that brings up an interesting topic...night surfing on a mat. 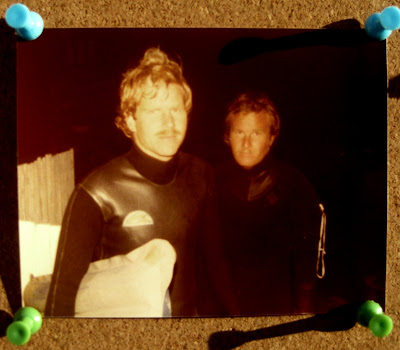 Paul Masiel (right) and me (PG) getting out of the water at Rincon at who-knows-what time of night. George had his still camera with a flash on the ready to document the epic event. This was taken on Tom Adler's porch, right at the top of the Indicator at Rincon. PM has on an Animal Skin wetty, but I was sporting thin cheapy...and I remember being so cold I was getting a little delirious. I'm carrying a Merrin mat with an unpeeled bottom, so that would put the date around 1978/79.

The first night surfing I was aware of was Greenough surfing Rincon in the dark, although surely nocturnal sliding was being practiced elsewhere...Malibu in the summer being the obvious spot for that kind of stoke.

George loved to surf at night -- usually at Rincon -- and by the 70's, there was a whole squadron of mat surfers who joined him for late evening/night go outs. Off the top of my head, a typical night-time lineup was populated by Paul Masiel, "Charthouse Duke," Bob Gillette, Greg Huglin, myself, and of course our ring leader George. Having a lot riders out at one time was a big advantage at night, because there was always someone sitting at the peak, so you would know what area to paddle back to.

Plus, it was less spooky when there were more matters in the water...the odds of being eaten by a shark went from a million-to-one to 6-million-to-one if 6 guys were out! (At least, that was our existential rationalization.) Of course, George's legendary "sense of humor" usually revolved around telling shark stories on moonless nights during long lulls. ("I was out drop line fishing right at this very spot in the water once when a 15 foot White cruised under me...and he reeeaaallyyy looked hungry!) Thanks buddy...

Night surfing at Rincon (on boards) picked up in popularity as the crowds of the 70's increased. Also, surf leashes made riding a board a night a lot more feasible. There were plenty of nights where just a few board surfers in the water would make it less fun (and a bit more dangerous) to ride a mat.

But, I've been thinking lately that maybe it's time to start surfing a mat at night in quality waves, rather then a steady diet of daylight junk. Both situations are uncrowded, but maybe the trade off of light for dark would be worth it now and then.

So how hard is it to ride a mat in the pitch dark? For me, the issue was picking off waves in the right spot. Mats have a more limited range for gliding into waves (compared to, say, boards over 7 feet long) and if you take off too far back, or too late, then it's hard to get your rail set and grab enough power to make it past the first section. I usually waited for a wave to break further out, and then caught the edge of the whitewater. Just wait for a mound of white water to come to you, and Bob's Your Uncle.

I found that I liked running a bit more air in the mat at night, to emphasize holding over skimming. I also tried using contact lenses back in the 80's to bring my 20/200 vision into better focus for enhanced surfing, day or night, but managed to loose a lens every other go out...and I ended up riding with a more upright style to keep my eyes further out of the water. I didn't like surfing a mat that way, so I went back to my natural blurred vision. 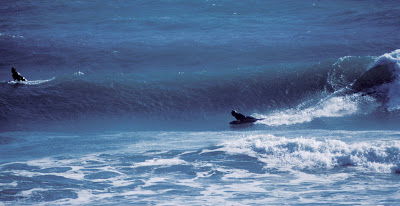 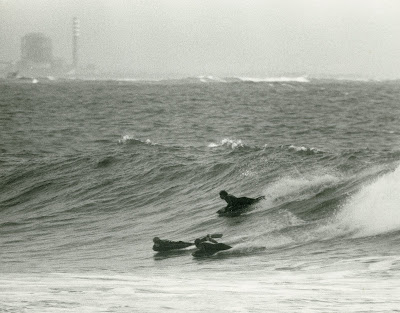 As for actually riding a dark wave on a mat, I always thought that part was easy and fun, even if there wasn't any moon that night. There's usually enough ambient light (from cars on the highway, street lights, etc.) that you can make out the shape of the wall as you go along. That said, I was never good at cutting back and re-establishing my trim line. I preferred to hang high on the wall, and if the waves slowed, just slow with it. Then accelerate as the wall steeped in front of me.

George's primary riding technique was to simply go by the feel of the wave underneath him. If you ride a wave in the daylight with your eyes closed, you can really feel how fat, or how steep, the wave is through the mat. It's pretty dramatic, actually. George would go almost entirely by feel.

I had lunch with Sally Yater about seven or eight years ago, and we started taking about surfing in Santa Barbara in the early 60's. She and Renny had moved up from Orange County several years earlier, and ended up living right on the point at Rincon. Bob Cooper was renting a room from them, so there was a lot of positive energy emanating from what had to be the bitchin-est surf pad on the face of the earth. (Or at least the Northern Hemisphere.)

One of Sally's fondest recollections revolved around the nights when George would come around their place after going door-to-door in the Rincon neighborhood selling the fresh fish he had caught that afternoon...then he would suit up on their porch, launch with a mat in the cove, and surf in complete darkness. On nights when the water was filled with phosphorous, Sally said they would sit on the porch sipping beers, and watch George's glowing green track as he streaked across the bay on perfect, empty walls.

I can't think of a single reason not to give that another shot...the waves are still out there when the sun goes down!

How about a night-time Mat Meet at a point break near you???
Posted by Paul Gross at 12:46 PM

I love surfing at night try it with a miners led light. Surf Trestles now and then on a moon night

I'm in. I know what you mean about riding by feel. It works best for me when I get started in the evening and then surf into the night. Luckily mats sort of take care of themselves when you lift your hands off the stick, and they tend to remain on the flight path.

Two of us female mat surfers have talked about it on more than one occasion. I even have glow sticks in my car in the event she says "the time is now".

Alright then, I'm in too!

WOW! that shot of you and Paul M. brings back some memory's . like the time you guy's saved my ass at C-St. after I got my board ripped off, I won't go into the details of that, too much! I still hit the night surf 2 or 3 times a year, I will say I am almost never alone anymore. Also was it at Paul M's wedding that you got George to put shoes on for a minute or two? Black dress shoes from sears from his high school graduation? the only time I EVER saw GG have shoes on!

KP was wearing full-on ski-lodge apres ski gear...looked like he was in the Alps!

Greg and Sue Liddle in attendance, along with Jeff Musser.

Thanks for reminding me of that, KP. Great memory.

Wonderful post! and we love surfing at night too!
Cowa-flexit!

The first time I met Kendog we rendevoused well before sunrise in a foggy parking lot. I followed him into the pre-pre dawn darkness, scrambling to keep his fins in sight as the volume of the pealing waves increased. The first thing I saw coming, just before it was on me, was a wall of white water. Nice to have glassy sets for our first mat clown go-out. Quite a rush. Several in-the-dark sessions have accumulated since. Easy to be a speed bump in the dark.

Serendipitously I just came across this. It's 2019,12:56 am, and I'm unwinding after a full moon surf at the point. Pretty hazy, which made a difference and yes, judging where the takeoff was going to be was the hardest part. I love what you wrote about waiting for the wave to start peeling, and also taking the simplest high line, and just slowing with the wave- how perceptive.. will do!
Now I'm stoked to try on a less bright cycle of the moon, why the heck not???
GREAT post and commentary!