So I just walked up the goat trail at Diamond Head, and I hear this soft voice and wrinkled old hand motioning for me to come over to her car window. "Boy I have some stories for you about those surf mats!"

She was an old women (eighties?) who sat relaxed in the seat of her Toyota gazing out at the lineup at cliffs as we talked for several minutes. She told me she used to ride a surf mat at Makaha. She mentioned her uncle used to coach Duke and that she was one of the first women to surf in Waikiki. Amazing, she really lit up when she talked about surfing and it was obvious it was still a part of her.....


And to think, I never would have gotten that glimpse into history had I been riding my 5'10 thruster. All the more reasons to get a mat!

Here is a story about The Duke, with a section on Pam Anderson, the woman Milt met... 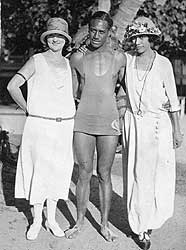 Ask Pam Anderson about Duke Kahanamoku and she’ll tell you stories about a man who loved the water.


“Once I was out surfing at Makaha,” she recalls, “and I saw this guy riding big waves on an air mattress. I thought, ‘Who in the world is that?’ All of a sudden the guy comes in and it’s Duke! He had blown up this mattress and gone surfing on it. But that’s how he was. He loved the water.”


Anderson grew up around the music and the water at Waikiki. Her father was songwriter R. Alex Anderson, the composer of Lovely Hula Hands and other classic hapa-haole songs. Her uncle, Honolulu waterman George “Dad” Center, coached the 1920 U.S. Olympic swim team in Antwerp, Belgium, where Duke won two gold medals.


Duke and Dad Center are now enshrined in the national Swimming Hall of Fame. But they also share another legacy. In 1917, following a giant earthquake in Japan, they caught a 30-foot wave at Castle’s Surf off Diamond Head and recorded the longest rides on a surfboard ever at Waikiki. Duke’s ride took him all the way into the beach, a distance of a mile and a quarter, and he later said of the experience that it was like “riding an avalanche.”


“Even when they were older, Duke and my Uncle Dad used to go out to Castle’s Surf,” says Anderson, who recalled a day during her youth when she was invited along. Her uncle had put a small engine on the back of his canoe, and together the three of them motored out in it toward Diamond Head. “When we got out by Castle’s, we turned off the engine and waited,” she says. “When a good-sized wave came along, we caught it and rode a long way in. It was quite a thrill.”


With Duke and her uncle as mentors, Anderson became one of Waikiki’s first women surfers. During the late 1940s and early ’50s, she paddled for Duke as a member of Outrigger’s senior wahine crew, eventually becoming Outrigger’s first woman steersman.


Anderson recalled that in the early 1960s, after the Outrigger Canoe Club moved to its current location near Diamond Head, she and the late Henry Ayau used to accompany Duke when he paddled out to the Diamond Head buoy for his daily swim.


“Duke was getting on in years and Henry and I decided he shouldn’t go alone,” Anderson says. “Just paddling with him was an amazing experience. He had these big hands, and anytime he took a stroke, his board just shot out into the water.”


Out by the buoy, Duke would slide off his surfboard and go for swim, utilizing that famous flutter kick of his as he glided through the water. After he returned to his board, the three of them would turn toward the beach and quietly paddle back in.


“Henry and I were very fortunate to have shared that experience with Duke,” Anderson says. “Duke loved being out on the water. I think it’s what kept him young.”
Posted by Paul Gross at 10:33 PM

Dad took us to Hawaii in '65, when he was photographing the Duke Kahanamoku Invitational Surfing Championship, where I got to shake Duke's hand. I also got to feel the glow of the likes of Uncle Buffalo and Rabbit Kekai... The impression of their gentle power and boundless love is still with me. I reckon that Duke was the most genuinely spiritual person I've ever encountered. If the leadership of our planet were more like them, this world would be a paradise for everyone. Polynesia and its iconic characters have much to teach us about real love and respect. We are all islanders sharing this fragile archipelago in the vast sea of space. Who better to show us the right ways than such classic waterpeople?