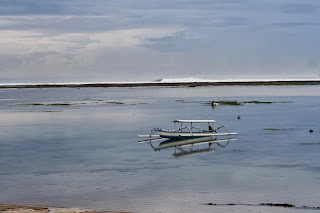 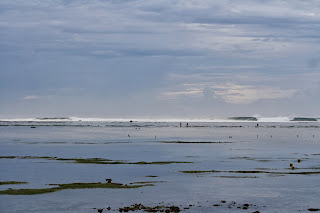 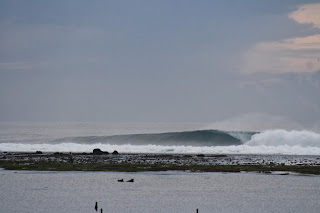 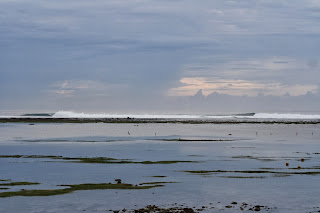 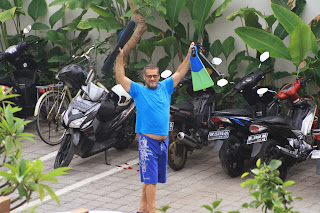 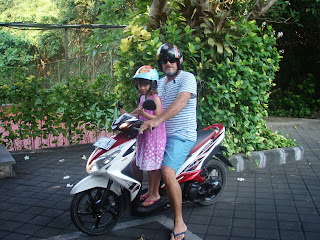 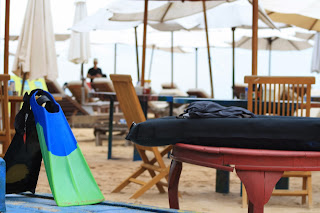 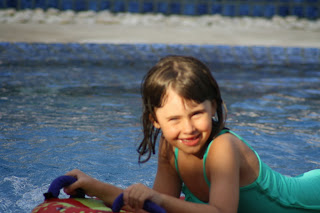 The next day it was back to the right hand point but the swell was waning which is good for the mat as not so many board riders show up. It was still fun and very fast, the Lotus 7 proved that it could preform well even in this smaller stuff. Back to the hotel to rest up again.

I woke up bright and early as we were moving hotels today. I wanted to get a mat in before check out time so I headed to a nearby beach that picks up more swell as it was still on the decline. It was a nice clean hip to head high left and rights. This beach reminds me of a beach break, the best beachy you have ever seen that breaks on coral. At low tide you have to walk over the reef to get to the waves which is a deterrent in its self. The reef is covered in "bulu babi" ( pig hair ) which is a very fine type of urchin that will impregnate the toughest of feet. I resorted to wearing flippers so only my heels became infested with these horrible spines. It was worth it however with only a couple of boardriders out and plenty of waves on offer. Needless to say I surfed until the tide had covered the reef so to avoid the dreaded "bulu babi" and paddled in. I'm sure that these spines fine as hair would mess up a surf mat.

Back to the hotel, packed, checked out and off to our new home for the next few days. This spot was a bit more exposed to the direct Indian Ocean swells so it picks up everything, also happens to be a fantastic mat wave, very powerful, shifty and long.
The first day here was small which was good to get the feel of this place on the mat. It breaks a long way off shore and comes from very deep water. The only thing though when its small it breaks in about a foot of water over very sharp reef, and has some of the roundest waves you will find at this size. I never thought surfing waves this small could be so exciting !

This is when my surfs all melded into one. The swell gradually increased over a few days then dropped a bit then came thumping in again right up until my last day. The next 10 days I only surfed at this spot.

My schedule was hit it for the dawny and surf for about three hours, no need to look for a second as that was usually enough. One day a huge shape emerged underneath me, I freaked for a moment until I realized it was a Dugong. I'm glad they only eat seaweed it was freaking huge !!! Another day I was slowly paddling in from an unbelievable session when I saw something that I mistook for a turtle head, paddling over I quickly discovered that it was a six foot long black and white sea snake, and it started chasing me !!!!

I had changed mats now to the Lotus 7 DRP as the waves were solid. If its 4 foot here, 6 foot cleaners will come, if its 6 feet 8 foot cleaners will come and so on. So when I'm paddling out double over head I'm wondering how big are the cleaners. It didn't take long to find out as a macking set broke on my head. I was so scared I clung to that mat for dear life, got comprehensively flogged from head to toe, three hundred meters around the entire reef. I didn't loose my mat ( that time) but came up with bleeding fingers and exhausted.... from one wipeout.

The Lotus 7 DRP was the perfect mat for this wave, so reliable and able to carve high speed lines on the long glassy walls, and hold high for the barrel. One surfer who was intrigued by the mat said to me one day " you never slide out on that thing ". The next wave I dropped the tail and slid at a 45 degree angle through a 50 meter section right past him, I could literally see the expression on his face "what the @#$##$".

By my last day I had started to work this place out for the mat, it was overhead height with double overhead clean up sets. I had the best mat surf that day, didn't make any mistakes and got some really long fast heavy waves. What a way to end a trip, and for a family holiday I managed to get quite a bit of matting in as well.

Bretto
Posted by Paul Gross at 8:53 AM