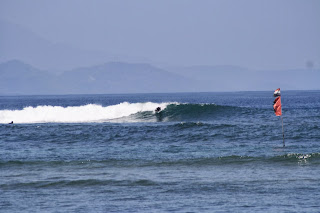 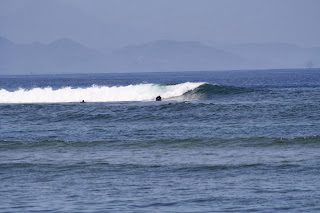 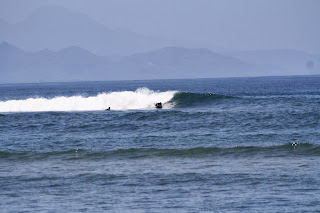 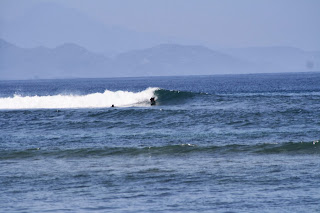 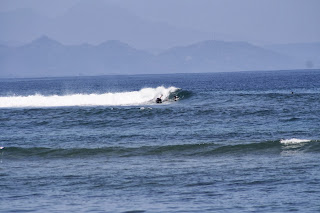 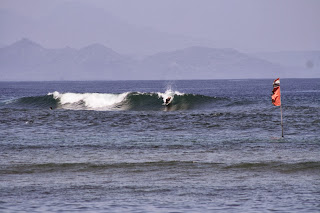 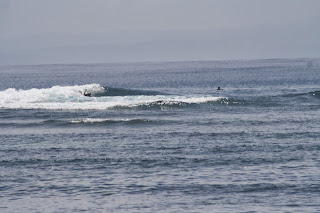 We arrived at the new airport in Bali mid morning after transiting in Singapore after a 7 hour flight from Brisbane the night before. The excitement was overriding our tiredness as we smoothly passed the VOA counter, immigration and onto baggage collection. My wife's suitcase came out followed by my 5 year old daughters. As I waited, I nervously commented what a disaster it would be if my bag didn't arrive as it had 3 flippers, 6 surfmats ( including one for delivery to a good mate) and my other assorted surfing paraphernalia. My clothes and toiletries didn't worry me as they could be replaced but not my stash of 4GF's. I began to sweat profusely.

After some time a very polite Indonesian man appeared holding a sign with my name on it........ " I'm sorry sir but your suitcase is still in Singapore !". After filling out a form at a locket the polite man directed me to, the young Balinese lady assured me that the bag would be sent to my hotel but when she could not say.
In the taxi ride to our hotel I was wigging out thinking this is already turning into the trip from hell, and it was only the first few hours !!! My fears were unfounded as by the time we had been through the check in my suitcase had arrived as promised ..... thank you Singapore Airlines. If I was on some of the other more budget carriers I often use I'm sure it would have been a different outcome.


The next day I was up before the sun came up and off to the premier break on this section of coast, it can be super heavy when its big, but up to head height its a super fun right on the mat and that's what it was forecast to be. The only bad thing about this spot is the locals will burn you at any opportunity, get violent and often order surfers from the water. If you know when they usually go out you can work around this and I've never had any problems. My luck was changing as in the glare of the just rising sun I could make out only one guy out.

First couple of surfs I usually take it easy just to get used to the indo power, acclimatize to the tropical heat and not get cut on the coral reefs. The sets were at long periods and the waves perfect hip to head height zippering barrels, in crystal clear water. I was riding a Lotus original and it rode like magic. After a couple of hours Id had my share and it was slowly getting more crowded, so when I spied another boat coming with a guide and a few locals I caught one in. Not wanting to overdo the sun and end up like many of the lobstered tourists I see the rest of the day was spent in the pool with my daughter, eating and relaxing in the AC of our room.


It is the start of the wet season so the heat and humidity was very tiring so only the one surf again and the rest of the day was spent relaxing as the day before.

The fourth day and third surf day looked good with the forecast swell of 2m arriving. I was up before light and off on the 40 min ride to this spot. Its a world class mat wave and had until recently completely off the surf radar. In these conditions it should be head height and pumping. On the way I passed an overturned mini van with people milling around, the crash had just happened, it looked bad and as there was nothing I could do continued on my way. After weaving through the muddy track of the rice paddies there was someone on a bike checking. It happened to be an old friend that I had surfed here before with, so with head height sets breaking down the 150m right hand point, a light off shore breeze we headed out laughing and catching up from where we left off surfing here last year. We surfed till our fill, a couple of hours, joined by a few other regulars and the headed back to town. The L7 original went so well here I felt I could not make a mistake. 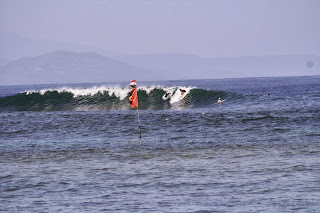