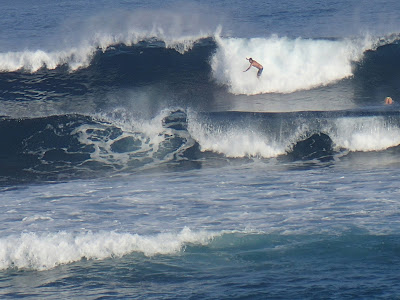 I've been spreading the matting word here on Maui and on Facebook, thought you might want to put the following on Surfmatters.

The photo is of the Point at Ho'okipa from this swell, not me but I like the lack of surfboard showing. Who needs a surfboard! Three days of NE swell on Maui, this was today, I've been matting every day. My favorite was the point Friday morning, one guy, "I thought you were on a jet ski, your were taking such a different line." Another guy, after I caught a wave outside and blasted past a longboarder by using a long undulating take off, "that motion you're doing is the kaneloa"(longman). I responded, yeah it's a good motion I try to do it when ever I can!

That outside take-off is currently my 'holy grail'.
It would do away with my SUP in waves (yeah, I admit it).
I'm usually the 'scrap-taker' or chasing the late take-offs, when all others have missed or messed up.
Still having heaps of fun, though.

Yeah, I've only just got the hang of it after about three years of matting. Part of it is using big fins. I use the extra long bodysurfing Vipers. A 90 degree or more
inflated mat and a full body movement once your moving as fast as you can using arms and legs. Put it together on a glassy day and you can get in so early! Today I used your technique and sat wide and got the ones others couldn't get to because with the offshores it seemed like I couldn't get in so early.