It Was A Glorious Day...

It was a glorious day. The crossing was smooth, the overcast cleared soon enough, and the water was really clear. 90 kids and a few adults frolicked in Orizaba Cove on paddle boards, kayaks, boogies, fins, masks, and snorkels. Oh, and one surf mat.

There was an odd surging left off the tip of the bird rock that was almost rideable. I got a few to myself before several of the groms joined me to grovel for some rides there until it was deemed unsafe by one of the directors -- a good call under the circumstances, because the group was more than a little disorganized, and the rocky bed underneath the swell was literally covered with thousands of perky little sea urchins.


I'm immensely proud of Decker. We snorkeled together in the morning, and after I got tired of it, he just kept going. He has this awesome hunter's instinct, fearless and curious, and he scoured that whole cove under his own power. At the end of the day, when almost all of the toys were pulled back aboard the boat, one soft top surfboard floated loose and away in the breeze. I asked Decker (swimming) and a pair of kayakers to chase it down. On the way, a big ol' sea lion was extra curious about the kids, and buzzed closer and closer. He finally loomed up just 3 or 4 feet behind Decker, who wasn't aware of it. But everyone on the boat saw it and a huge collective "Whoa!" went out. Decker heard and turned around, face-to-face with the animal that almost looked bigger than him -- it certainly swam faster! He wasn't fazed, just talked to it as it dove then loomed again, and so he turned and redoubled his efforts to collect the lost board. He got the job done, never lost his nerve, and earned a lot of credibility with all of the kids on the trip. 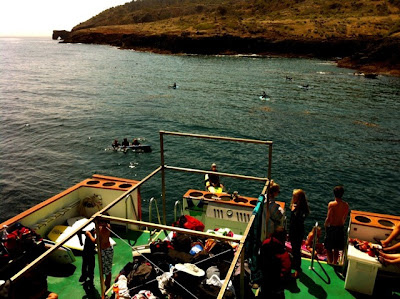 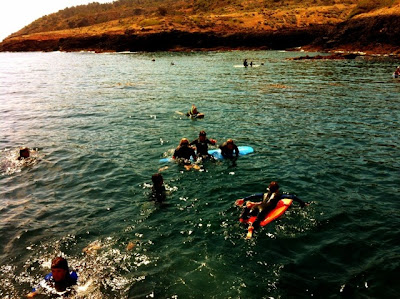 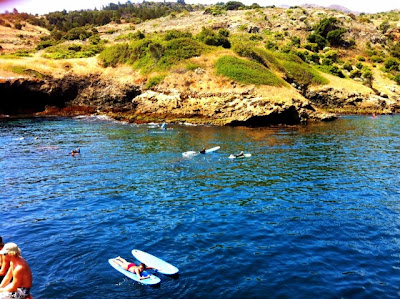 I guess I might clarify that this was a trip from Santa Barbara out to Santa Cruz Island with a boatload of Junior Lifeguards. Orizaba isn't a particularly special cove, but it's almost literally the closest straight shot to SC right out of the SB harbor mouth.