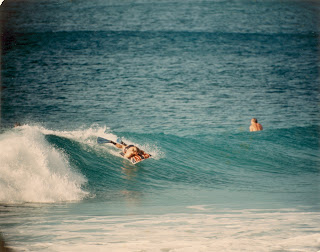 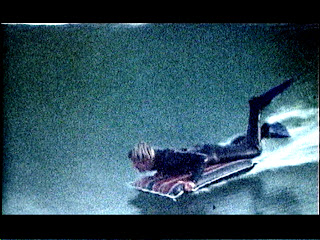 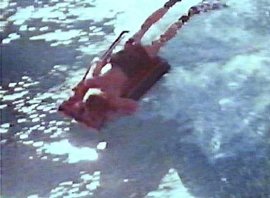 The "Stripes Down" Hodgman Converse mat was a game-changer in terms of surf mat performance. It was a narrower mat -- along the lines of today's highest performing mats like the 4GF Standard. Before the Stripes Down model, mats were wide, corky affairs that favored either small kids looking to blow their mats up rock hard and stand on them, or larger adults riding them in small surf.

When the Stripes Down model turned up in the 60's, it was as if they designed a surf mat just for George Greenough. The lean width allowed him tuck into tubes that were a struggle with the earlier, wider rafts. Larger riders were put off by the narrowness, but for a thin, talented mat rider like George, it was heaven.

The above photos area all from the late 60's. You can see that the square corners and stiff material forced him to really get a grip on the pontoons to keep the mat under control.

The Stripes Down Hodgman was the design that all subsequent mats were compared to, and it was the mat design we used as "ground zero" when the first nylon prototypes were built in the spring of 1983.

The shape is obsolete these days, even when rendered in thin nylon fabric. The "new" (post 1984) three pontoon shapes do everything better...but back in the day, these things were cutting edge.

How did the three pontoons come about? Did you make mats with two? Or even ibeams and no pontoons?

Traditionally, there have been 4 or 5 pontoon mats, with the occasional 3 pontoon mat made for children.

3 pontoon mats generate what we feel is the ideal volume of air relative to the length, width and thickness of most mats. And, the two deep grooves generated by 3 pontoons allows the mat to turn, trim, and hold-in with the most efficiency.

Of course, this is all subjective, and others may disagree. But after 28 years and over 3000 one-off, hand made mats under our belt, the three pontoon design, with stabilizing I beams in the middle of the pontoons to control the thickness, continues to be what works best in our view.

The hodgy as we called them came in two sizes as I recall. We would pump them up and even wax them to stand on.