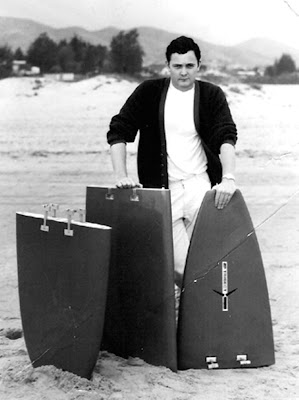 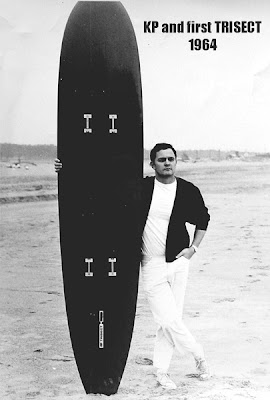 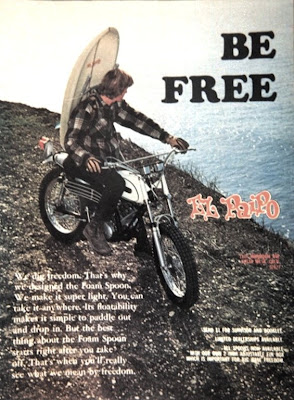 Surf travel really didn't catch on with the general public until the 60's, and not with any kind of serious volume until the 80's. In fact, during the earliest surf-related travels of Duke Kahanamoku (after the turn of the last century) he often waited until he got to a location, then made a new board for himself!
The 60's saw worldwide jet travel explode along with the popularity of surfing...but dragging a 10 ft long board on board an overseas flight was hard. The airlines weren't oriented to dealing with sporting accoutrement at that time, and boards were awkward on top of that.
Enter Mr. Karl Pope. He developed the Tri-Sect surfboard in 1964, then formed Morey-Pope with Tom Morey to produce them. The Tri-sect wasn't a resounding success, mainly due to the weight increase of already heavy longboards. But the idea was sound, and Karl came back in the 90's with Bi-Sect boards which were weight friendly.
The El-Paipo print ad from 1970 really struck a chord with the new generation of shortboard surfers. In fact, in recent years I've heard a lot of people say that this is the best ad ever published in Surfer Magazine. What a timeless sense of adventure it evokes!
Of course, mats have always occupied the top rung of the ladder when it came to compact surf travel. I remember being disappointed at how un-surfy my dad's car looked when we had mats in the trunk. I wanted boards on the roof, dammit! And when Boogies surfaced in 1974, a lot kids had their parents lash them on top of the car to address their need for public identity.
Please post your mat travel stories in the comments section...and if you have photos, send them to me at fourthgearflyer@yahoo.com !
Posted by Paul Gross at 9:23 AM

The other day my son studied me for a long moment before declaring, "Dad, you don't look like a surfer." I winced, then tried to shuck it off. "Well, no son, I guess I'm not really a surfer anymore. I used to be a surfer. Now, it's just kind of a hobby. I'm actually a mat rider." Apparently that satisfied him, but it got me to reminiscing a bit.

I was one of the "black wetsuit, clear board, no logo" types. Although I self-identified as a surfer when I was younger, I've generally tried to keep a stealthy low profile with regard to others, and to avoid wearing my surf identity on my sleeve. Or rather, I wanted it to be something that I could show or hide at will. In the early 70s my boards were all short Lis fishes in a world of 7' 6" pintails. I took some smug satisfaction from the fact that I was the only guy I knew who could slip his board into the back seat of the sedan -- everyone else needed either a van, a hatchback, or racks. I kind of liked the notion that I could grovel like an animal all day in the waves, but when I combed my hair and put on a nice sport coat, all that my date's parents would see was a decent young fellow stepping out of a modest Peugeot 404 as he arrived to take their daughter out to a movie.

Maybe there was some hypocrisy in that behavior, but I continue to enforce a distinction between beach life and everything else. So of course the mat plays right into this, with its very ephemeral nature. The surfer mode doesn't even need to start anymore until the breathing ritual begins, and by the time that the mat is inflated enough, the transition has occurred. I'm a surfer while I'm surfing. Then likewise in reverse, when I release the captured air and strip off the garb, that identity drains away and other psychological horizons re-appear. The mat gear packs away to a discrete little unit, and we're off.

A little contrived, I realize, maybe a little forced, but it's a game I enjoy playing.

Gee, that didn't have anything to do with travel at all, now, did it.

I think that if I just sit with it for a while the desire will subside, but it's been a powerful hankering for a while now. Along with one of them Homer Hilsens!

One "Homer Hilson" verse, coming up!

"Though travel wide and far do I

Past foggy crags, where the lost sheep bleat,

For I ride A. Homer Hilsen!"