Four weeks ago a lifeguard called the police on me because I refused to get out of the water when I was mat surfing in two foot onshore mush. “No inflatable flotation devices allowed!” While mat surfers somewhat enjoy the quizzical looks on people’s faces and the genuine curiosity that surfmats evoke, sometimes you get tired of the otherness. Which is why the feeling of camaraderie and excitement at the October mat meet at Rockaway Beach was so palpable.

Mariah Ernst, her boyfriend John, who just flew in from Saint Thomas, and I all arrived at the beach promptly at 10 not knowing if anyone else would show up. Lulu and Tim Darwish were waiting there, slowly blowing air into their stash of Neumatics.  We paddled out, catching a slew of two foot glassy lefts that ended in shorebreak microtubes. Over the next hour I counted as the pack of mat surfers grew to at  least 15!  Heard in the water: “I can't believe there's this many of us!” “Is this an East Coast record? “How do you duck dive?”  “How are we gonna take a group photo of everyone keeps shredding?” “ Where are Nicole and Justin? “I heard they got stuck behind a garbage truck in Ridgewood!” “Has anyone seen my yellow fin?  I borrowed it from someone and promised I wouldn't lose it!”

Glenn showed up with the first square nosed paipo the world has ever known and took a bunch of pics from the water. Justin and Nicole showed up with their cute dog and a stash of Neumatics and 4th Gear flyers after escaping the Ridgewood garbage trucks. (Justin has rad technique for punching through waves on his mat. He hugs the outer rails of the mat in, folding it into a vertical taco shape as he kicks through the back of the wave torpedo-style.) The belly sliders were ruling it so hard that our longboard friends decided to paddle to the next jetty as to not have to compete with the bumper boat army...They came back later and had a blast riding close outs all the way onto the beach: “I'm hooked.” “I gotta get one.”  “I got a hundred waves!” One kid from North Carolina showed up and surfed for hours in trunks; this was a short pit stop on his journey north. We even had one couple show who gave mat surfing a go that had never surfed in any fashion before. (Mariah calls them Gold Star Matters if they've never been on a surfboard.)

On the drive home, talk turned to who had the best mat technique.  The honors went to a quiet fellow from the Rockaways who was taking off nice and smooth right behind the jetty, making long sections without kicking up too much spray. It's so subtle what makes a good matsurfer. Basically you don't notice them. Karen who is co-organizer of Full Moon Surf Sails with Mariah, was sharing her pure, newfound, stoke on mat surfing along with Brenda, who alternated between bodysurfing, paipoing, boogieing, matting and various other forms of alternative surf craft. I’ve never seen someone squeeze so much into one sesh. The waves stayed 2-3 foot and shiny clean for about 4 hours before the wind kicked up. We had them all to ourselves.  It was like that moment in the 80s movie where the nerds take over the school. It was like the first time you snuck into the movies with friends. Like, I can't believe this is really happening. All the sparkling light! 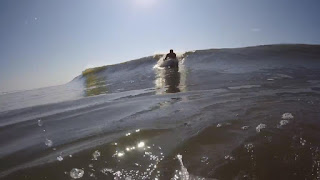 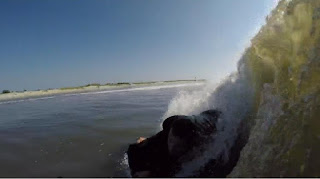 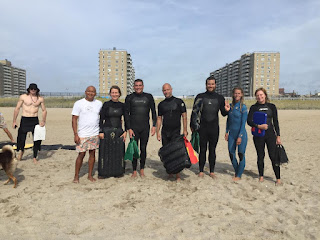 Love the flat graphic quality of those shots from directly overhead.

10 Quackers Brothers and Sisters #ericwouldhavegone for sure! View from Heaven , Love the tunes and footage!